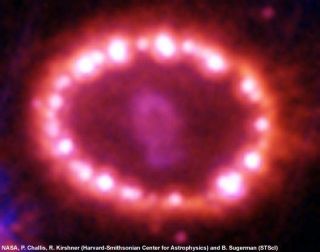 Light from this supernova, called supernova 1987a, first reach earth in 1987. It occured in a nearby galaxy and was the closest supernova since the invention of the telescope. The Hubble Space Telescope took this picture of supernova 1994.
(Image: © NASA, P.Challis, R.Kirshner (Harvard-Smithsonian Center for Astrophysics) and B. Sugerman (STScl))

Burning a billion times brighter than our sun, the phenomena called supernovas have unlocked mysteries about black holes, the origin of metals such as gold and the expansion of the universe.

Supernovas are rare -- the last supernova seen in our galaxy was recorded in 1604, according to NASA.

Although this supernova may have baffled those living at the time, by observing supernovas in other galaxies, astronomers now understand what a supernova is the final explosion of a massive, dying star.

What happens during a supernova

All stars, including our sun, will eventually run out of the hydrogen gas that fuels the nuclear fusion reactions in their cores. When this happens, smaller stars expand into what astronomers call red giants, then shrink into faint white dwarfs, according to NASA.

But massive stars, that have at least five times the mass of the sun and can be much larger, are likely to become red supergiants and explode in supernovas.

Forces at work within stars are what give rise to the explosion seen during supernovas. For most of a star's life, gravity pulls its gases inward, but its nuclear reactions push the gases outward, and the forces engage in a constant tug-of-war. But when the nuclear fusion in a star stops, the star loses the outward push that countered gravity. Gravity then takes over, and the star begins to collapse in on itself.

Eventually, the force of the collapsing material heats up the star's core enough to start a series of new nuclear reactions, forming heavier and heavier metals, until the core becomes solid iron and nuclear reactions stop.

Within a second, the iron core's temperature rises to more than 180 billion degrees Fahrenheit (100 billion degrees Celsius), crushing the iron atoms closer together until the core explodes in a shock wave. This explosion is a supernova.

Supernovas may leave behind a brilliantly colored cloud of gas called a nebula, a black hole or perhaps nothing at all.

But that just explains Type II supernovas. Type I supernovas involve a complex interaction between a pair of a binary stars where one star eventually explodes, according to NASA.

In February 2006, researchers observed an unusual supernova 440 million light years away. As it exploded, the supernova released an intense flash of X-rays called a gamma-ray burst.

As more research is done into supernovas, scientists have also used the phenomena to study the entire universe.

A subtype of supernovas, Type Ia, are among the brightest things in the universe, and all shine with roughly equal intensity. So by observing supernovas over time, researchers in the 1990s were able to see that the supernovas were all moving away from the center of the universe at an increasing rate, showing the universe was expanding.

Scientists call the unknown force behind the expansion dark energy.

In April, the international Supernova Cosmology Project (SCP) at the Lawrence Berkeley National Laboratory announced the largest collection of data on supernovas yet amassed, to continue studying dark energy.