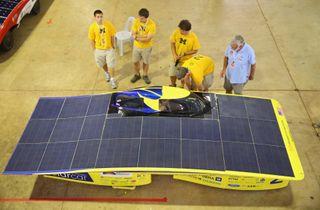 Solar-powered vehicles are becoming more common today. Solar cells power cars, boats, airplanes and satellites in space. Solar racing is a growing sport with competitions around the world. Even some toys get their power from solar panels.

From the most basic toy solar racer to the most advanced solar-powered satellite, the foundational elements date back more than a century. The first dry cell battery was invented in 1895. Electrically powered cars debuted in 1900 and the solar panel was invented in 1941. With each of these developments, mankind made steady progress in harvesting the sun’s energy and converting it to power.

Solar-powered vehicles get the energy they need to move from the sun. Typically, the vehicles have a large solar panel mounted on top. The color of the panel is often black, as this assists with its ability to absorb sunlight. Black objects, as opposed to any other color, absorb the greatest amount of light that falls upon them. Usually, this means black objects simply get hotter in the sun, but with solar racers the energy is converted into electricity using solar cells. These panels are connected to the car’s electric battery for excess electrical storage and engine for fuel.

At its most basic level, a solar cell turns solar radiation into electricity. A typical silicon solar cell is made up of single or polycrystalline structures. The atomic makeup of silicon is altered to create P-type (atoms missing electrons) and N-type (atoms containing electrons) silicone crystals using phosphorus and boron to create interactive layers of materials that will react to sunlight.

When placed in the sun, photons from solar radiation strike the top layer of silicon and create an electron and a hole, prompting an imperceptible exchange of electrons switching between both P-type and N-type molecules. This steady exchange creates of current through which power is generated and voltage created. These solar panels are then connected to devices like batteries to store the electricity generated for use in a vehicle like solar racers.

The design of solar racers

Because a solar racer relies on sunlight-based power, most vehicles are designed with a broad surface for capturing the sun’s rays. The design is mainly necessary because of the inefficiencies of solar panels. In a perfect world, a solar panel could convert all of the light falling on the car into energy. However, even the best of today’s solar cells can only convert around one-quarter of the sun’s power into electricity.

The end result is a very low-horsepower vehicle with a typical motor output of about 2 to 8 horsepower. The typical consumer automobile retains an average of 100 to 150 horsepower in comparison, which means these vehicles must be designed as light as possible. The typical weight of a two-seated racer is around 400 pounds, allowing it to retain maximum speeds of nearly 90 miles per hour.

Solar racing as a sport

The sport of solar racing is quite popular in sunny regions, the most popular race being the World Solar Challenge in Australia. Vehicles powered by solar energy are designed for endurance races to cover the 3,000-kilometer race (1,864 miles) in the least amount of time.

Colleges and universities in the United States often build and race solar cars. While the races typically don’t cover such grand distances as the one in Australia, they still serve as excellent learning experiences and prove a popular competition among academic departments at institutes.

Many vehicles use solar energy beyond road-faring technology. For example, planes powered by solar panels continue to grow in popularity due to the capabilities they provide. The ideal outcome is to design a vehicle capable of maximizing solar energy conversion for virtually endless flights. By reaching altitudes of more than 80,000 feet (24,380 meters), more sunlight can be captured and converted for even greater electrical output. [Images: Cross-Country Flight in a Solar-Powered Plane]

NASA's Juno spacecraft, which is on its way to explore Jupiter, is the first solar-powered spacecraft to explore the outer solar system. It has three large solar arrays, each of which is the size of a tractor-trailer.

Even more popular are the use of solar-powered remote control toys like planes and cars. Rather than relying on wall-charged batteries, these devices have tiny solar panels installed on their surfaces to draw upon the energy of the sun and thus create a power source.

Solar racer toys employ the same principles of solar powering used for full-size cars. Across these devices are large, flat (sometimes curved) solar panels attached to a small battery. The cars operate much like any other remote control car, though their power source is dependent on the presence of a sun and thus suffers on cloudy days.

Most solar racer toys require some assembly and teach children how something as simple as sunlight can be used to power everyday devices. As the mankind continues to branch out, renewable energy becomes a more popular and important power source to consider due to its clean and frequent availability.