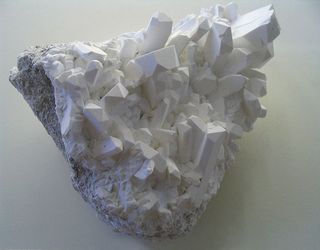 Boron is a multipurpose element. It's a crucial nutrient for plants, an important component in the nuclear industry and the main ingredient of a bizarre fluid called oobleck.

Perched next to carbon on the Periodic Table of Elements, boron is a metalloid, a substance with both metallic and nonmetallic properties. It's a complicated element, as Stony Brook University professor Artem Oganov told the New York Times in 2009.

"Boron is a truly schizophrenic element," Oganov said. "It's an element of complete frustration. It doesn't know what it wants to do. The outcome is something horribly complicated."

Compounds of boron, particularly borax, have been used by humans for thousands of years, according to Chemicool. Borax (sodium tetraborate) forms naturally during the evaporation of some salt lakes, according to AZoM, an online reference site for the engineering and materials science community. In the eighth century A.D., borax was exported from Tibetan lakebeds along the Silk Road for use by Arabic goldsmiths and silversmiths; it was also used to make ceramic glazes in China.

These early uses echo in borax's (and ultimately, boron's) name: The word is from the Arabic "buraq," or white. However, the element itself was not extracted until 1808, according to the Royal Society of Chemistry. Even then, chemists weren't able to get a pure form of boron. That goal was not reached until a century later, in 1909, when U.S. chemist Ezekiel Weintraub isolated 99 percent pure boron.

According to Jefferson Lab, the properties of boron are:

As part of borax, boron is a very common household element that is found in many detergents. (Pro tip: A borax-sugar solution will also kill ants!) It's also in the recipe for the science-fair goop oobleck, a liquid with some very strange properties. A mixture of borax solution and liquid glue creates a substance that is liquid when it is poured but solid when it is under pressure. Oobleck is a non-Newtonian fluid, which means that its viscosity depends on the shear force applied to it. The glue and oobleck join up to create long, thin polymer molecules. A "tap" or strong pressure forces the molecules in the fluid together, creating a solid. A slow movement like pouring or a gentle poke allows the molecules to flow against one another, making the oobleck behave like a fluid. The same concept is what makes Silly Putty both able to flow and bounce. (Oobleck can also be made with a mixture of cornstarch and water.)

But boron isn't all fun and games. The isotope boron-10 happens to be excellent at absorbing neutrons. This is extremely handy for nuclear fission, which is driven by careening neutrons knocking uranium atoms apart. The key to this process is balancing it so that every fission event triggers just one more fission event; otherwise, the reactions speed up like a runaway train and the reactor is said to go supercritical. Bad news all around.

To keep nuclear reactions in balance, reactors are equipped with devices called control rods, often made of boron or other elements, according to the U.S. Nuclear Regulatory Commission. Boron absorbs excess neutrons, preventing them from zinging into too many uranium atoms.

Boron doesn't have a lot of pop-culture cachet, but science has a lot to say about this surprisingly intriguing element. For example, plant biologists have long known that without boron, plants don't grow. The element is an essential nutrient.

But why? No one knew until August 2014, when researchers at the University of Missouri ferreted out the answer. Boron, they found, is crucial to the stem cells of plants. Portions of the plant called meristems are made of stem cells, which themselves are capable of giving rise to all the different cells that make up a plant. Without boron, these meristems wither, the researchers reported in the journal Plant Cell. In the eastern United States, farmers have to supplement their soil with boron in order to boost crop yields.

Boron may be a boon to tech as well. In July 2014, researchers discovered the first boron "buckyball," a cagelike structure similar to the soccer-ball-shaped carbon buckyballs often used in nanotechnology. Carbon nanostructures (known as fullerenes) were first discovered in the 1980s, and they prompted a wave of research in the hunt for other intriguing atom clusters.

"If you look at the main group elements, there is no better place to start than boron," said Lai-Sheng Wang, a chemist at Brown University who discovered the first boron buckyball. Boron atoms bond strongly with each other, Wang told Live Science, and the element has a very high melting point. It's tough stuff.

Wang and his colleagues began by putting clusters of boron atoms together to see the shapes they'd form as they bonded, a process that required them to use lasers to dislodge electrons from the cluster. The electron's ejection speed can then be used to determine how it was originally bonded in the atom cluster, allowing the researchers to map out the structure, which they call a borospherene.

When 39 or fewer boron atoms bond together, they form a flat structure. But at 40, the structure becomes a spherelike "cage," the researchers reported in the journal Nature Chemistry.

Wang and his team have also discovered that some of boron's flat structures could be very useful. In research published in January 2014 in the journal Nature Communications, the scientists found that 36 atoms of boron will form a disk with a perfect hexagonal hole in the middle — an arrangement that theoretically makes it possible to create a stable, one-atom-thick sheet of boron. If such a sheet can be created, it would be the boron equivalent of graphene, which is an atom-thick sheet of carbon molecules. Graphene holds a great deal of promise for tech because it is a cheap, strong, flexible conductor.

The boron version — or "borophene," as Wang and his colleagues are calling it — might have similar applications as an electrical and thermal conductor, but researchers aren't yet sure. They'll need to make real borophene sheets first, and then test their properties.

"Sometimes when you go the lab and make these things, nature has its own way," Wang said.