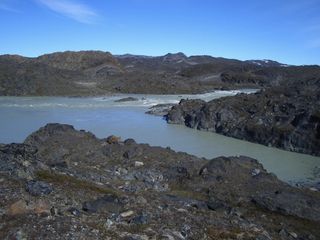 SACRAMENTO, Calif. — A critical building block for creating the first life on Earth was found in 3.8-billion-year-old rocks from Isua, Greenland, researchers reported this week here at the annual Goldschmidt geochemistry conference.

For the first time, rich concentrations of the element boron have been found in Isua's ancient marine rocks, study author Takeshi Kakegawa, a professor at Tohoku University in Japan, said Monday (June 9). The discovery signals that boron was circulating in seawater and was absorbed by marine clays, which eventually became tourmaline, he said.

Boron can stabilize ribose, one of three key components of RNA. Ribose, an organic sugar molecule, has a short half-life and naturally decomposes without a stabilizer. Many researchers think life on Earth descended from RNA, which self-assembled from building blocks such as ribose. [7 Wild Theories on the Origin of Life]

Until now, theories for the origin of RNA life pointed to RNA-based chemicals arriving on Earth from Mars. That's because Earth's first rocks and oceans seemed devoid of boron, which takes the form of borate minerals on Earth. On Mars, clays with boron and another RNA stabilizer, molybdenum, are abundant.

"I want to challenge this idea that the early ocean was borate free," Kakegawa said. "The early ocean already contained borate, and therefore, early Earth — not Mars — could provide environments to stabilize ribose."

The Isua rocks are among the oldest pieces of crust still around from Earth's earliest eons. The layers were deposited under a liquid water ocean, perhaps when life was first emerging. After billion of years of continental smashups, the rocks have been heated, faulted and folded, but geologists can still decipher their original history. Some of the rocks were seafloor sediments, such as mud and chert, and others were lavas erupted from underwater volcanic vents, such as pillow basalts.

Kakegawa discovered the boron in tiny tourmaline crystals trapped inside garnets in the ancient seafloor sediments. The garnets and tourmalines formed after the sediments were deposited, when the rocks were metamorphosed. Boron is one of the major elements of tourmaline.

Isua's volcanic rocks also carry boron-rich tourmalines, according to a separate study reported Wednesday (June 11) by Edward Grew, a professor at the University of Maine. Hydrothermal fluids circulating in the rocks are the likely source of the boron, Grew said.

Boron has two isotopes (elements with different numbers of neutrons in their nuclei). The boron isotope ratio in Isua's volcanic rocks also suggests early oceans carried enough boron to support RNA-based life, Grew reported. "This is consistent with the scenario Dr. Kakegawa suggested," Grew said. "There could have been a role for boron in the stabilizing of ribose in the RNA origin of life."

Grew found evidence for boron-rich seawater cycling through the Isua volcanic rocks, despite a lack of continental crust. The tourmaline formed in an environment resembling today's deep-sea hydrothermal vents, where superheated seawater and other fluids spew from volcanic fractures.

The abundant tourmalines indicate the fluids circulating through the ancient rocks were rich in boron, Grew said. "There is no convincing evidence of seawater boron concentrations being lower at 3.8 billion years ago than at the present," Grew said.