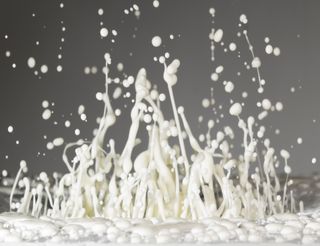 Non-Newtonian fluids change their viscosity depending on the stress or force applied, transforming from liquid-like to solid-like in a flash.
(Image: © Shutterstock)

A slurry of cornstarch and water is far weirder than the sum of its parts. Move it slowly, and it flows like a liquid; hit it or sheer it quickly, and it locks up like a solid.

The goo is so weird that it gained Seussian fame (and a name) in “Bartholomew and the Oobleck,” in which the substance almost sealed the fate of the Kingdom of Didd.

Beyond fairy tales, oobleck is a staple of science labs and preschool classes. Now, researchers have created the first 3-D computer model that can predict the seemingly mysterious behavior of the substance, possibly opening doors for far more serious uses of oobleck. (Whether or not this model would have saved the Kingdom of Didd, we’ll never know.)

“There may be ways to use this material in ways we haven’t thought about yet, where you can design it to turn into solid-like behavior under very, very specific circumstances,” said study leader Ken Kamrin, a mechanical engineer at the Massachusetts Institute of Technology. One example, Kamrin told Live Science, might be protective clothing that could move and flow flexibly unless hit hard, in which case it would stiffen and act like a shield.

Oobleck is a non-Newtonian fluid, a term for fluids that change viscosity (how easily they flow) under stress. When you run your fingers slowly through cornstarch and water, it acts like a liquid, but apply rapid force, and it solidifies, bends and even tears.

"It really is like a liquid if you move it slowly, but it does everything you expect of a solid if you play with it quickly," Kamrin said.

After seeing a scientific talk about oobleck's properties, Kamrin and his colleagues launched a "very healthy" internal debate over how cornstarch and water might differ from other wet, granular materials. The scientist and his team typically focus on the flow of sand, gravel and other industrial materials. But cornstarch is different, he said, largely because the particles are so tiny. Cornstarch particles are a micron to 10 microns in size, smaller than the diameter of a human hair.

At this size, particles are susceptible to the tiniest of thermal and electric forces, Kamrin said. As a result, cornstarch particles in water actually repel each other slightly, held apart by forces too weak to impact something as large as a grain of sand. This repulsive force helps the slurry flow, as the particles prefer a layer of fluid between then. But when squeezed together, friction takes over and the particles move like a solid.

Kamrin and his team started with a computer model of wet sand that they'd already developed, making adjustments to better mimic wet cornstarch. Most importantly, they added an extra variable to predict how many grains of cornstarch touch one another in a given region of the fluid. This variable, which Kamrin jokingly refers to as "clumpiness," allows the model to determine how solid-like or liquid-like the oobleck will be.

The model, outlined Sept. 27 in the journal Proceedings of the National Academy of Sciences, can be used to simulate oobleck's reaction to various forces, like being squeezed between two plates or hit with a projectile. The researchers also tested the model with a virtual "wheel" by running it over a tank of oobleck, finding that the faster the wheel traveled, the firmer the surface of the oobleck.

That experiment echoes one potential use of oobleck as a temporary fill for potholes, Kamrin said. On a road with a high enough speed limit, a bag of oobleck (or oobleck-like material) could be dumped in a pothole, deforming to fill the void and transitioning to a solid when run over by car wheels.

"You can basically try to design on the computer using the model," he said, "and once you think you have the right protocol, you can make something."