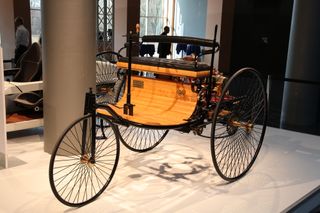 The history of the automobile is a long and winding road, and pinpointing exactly who invented the car is not a simple matter. But if you rewind the evolution of cars past GPS, past antilock brakes and automatic transmissions and even past the Model T, eventually you'll get to the Benz Motor Car No. 1, the missing link between cars and horse-drawn buggies.

Karl Benz patented the three-wheeled Motor Car, known as the "Motorwagen," in 1886. It was the first true, modern automobile. Benz also patented his own throttle system, spark plugs, gear shifters, a water radiator, a carburetor and other fundamentals to the automobile. Benz eventually built a car company that still exists today as the Daimler Group.

Long history of the car

Benz patented the first gasoline-powered car, but he wasn't the original visionary of self-propelled vehicles. Some highlights in the history of the car:

Electric cars were available in the middle of the 19th century, but fell out of favor after Henry Ford developed his Model T, according to the U.S. Department of Energy. In recent years, electric cars have made a comeback, though. Over 159,000 electric cars sold in the United States just in 2016, with more than half of those in California alone. This technology, like the internal combustion engine, also has a long history that is difficult to point to one inventor.

Two inventors are typically credited with independently inventing the first electric car: Robert Anderson, a Scottish inventor, and Thomas Davenport, an American inventor, in the 1830s, according to AutomoStory. The first rechargeable battery was invented in 1865 by Gaston Plante, a French physicist, which replaced the non-rechargable batteries used in early models of the electric car. A few of the innovations following include:

Electric cars continued to gain popularity and in 1895, the first automobile race in the United States — a 52-mile "dash" from Chicago to Waukegan, Ill., and back, which took the winner 10 hours 23 minutes (average speed 5 mph / 8 km/h) — featured six entries, and two of them were electric cars, according to Smithsonian magazine. By 1900, the New York City taxi service had about 60 electric cars and approximately a third of cars in the United States were electric, according to the Department of Energy.

When Henry Ford introduced the Model T in 1908, the inexpensive and high quality gasoline powered car became very popular and the decline of electric cars began, according to the Department of Energy. By the 1920s, gasoline had become cheaper and more readily available, and more Americans were traveling greater distances. Electric cars didn't have the range that gas-powered cars had, and electricity was still not readily available in many rural cities, making the gasoline-powered cars the automobiles of choice.

In 1976, Congress passed the Electric and Hybrid Vehicle Research, Development, and Demonstration Act due to rising oil prices, gasoline shortages and dependencies on foreign oil. Many car companies began to research and design new fuel-efficient and electric options, although not much happened until the 1990s.

The Toyota Prius, developed and released in Japan in 1997, was the world's first mass-produced hybrid car and was available around the world by 2000. The Honda Insight hybrid car was released in the United States in 1999.

Tesla Motors began development and production on a luxury all-electric car that would travel more than two hundred miles on a single charge in 2003 with the first model released in 2008. The Chevrolet Volt, released in 2010, was the first available plug-in hybrid that used the gasoline engine to extend the range of the automobile when the battery was depleted. The Nissan LEAF was also released in 2010 and was more readily available to the public than Tesla's Model S.

Today, nearly every major and many smaller automobile companies are developing their own electric and hybrid models.

Karl Benz gets the credit for inventing the automobile because his car was practical, used a gasoline-powered internal-combustion engine and worked like modern cars do today.

Benz was born in 1844 in Karlsruhe, a city in southwest Germany. His father was a railway worker who died in an accident when Benz was 2 years old. Although poor, Benz's mother supported him and his education. He was admitted to the University of Karlsruhe at age 15 and graduated in 1864 with a mechanical engineering degree.

Benz's first venture of an iron foundry and sheet-metal workshop flopped. However his new bride, Bertha Ringer, used her dowry to fund a new factory to build gas engines. With the profits Benz was free to start building a horseless, gas-powered carriage.

Benz had built three prototypes of his Motor Car in private by 1888, when Bertha decided it was time for some press. Bertha took the latest model in the early morning and drove her two teenage sons 66 miles to her mother's home. She had to improvise repairs along the way with shoe leather, a hair pin and her garter.

The successful trip showed Benz how to improve the car, and showed a dubious public that automobiles were useful. Benz demonstrated the Model 3 Motorwagen at the World's Fair in Paris the following year.

Benz died in 1929, just two years after he merged with fellow car-maker Gottlieb Daimler's company to form what is today the Daimler Group, manufacturer of the Mercedes-Benz.