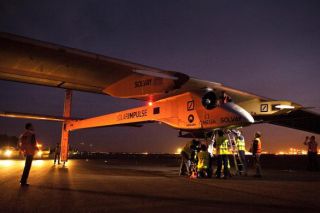 A solar-powered airplane is poised to depart on a historic coast-to-coast flight across the United States Friday (May 3), in a bold attempt to fly across the country without using a single drop of fuel.

While the details of Friday's flight have been planned, local weather conditions may postpone the take-off or alter the plane's route, company officials said.

Solar Impulse founders Bertrand Piccard and André Borschberg will alternate piloting the single-seater plane over the five legs of the journey.

In mid-May, the ultra-lightweight plane will begin the second leg of its trip, taking off in Phoenix and landing in Dallas, Texas. Toward the end of May, Solar Impulse will depart for St. Louis, Mo.; the fourth leg will take the plane from St. Louis to Washington, D.C.; and the fifth and last leg will end in New York City in late June or early July. [Images: Cross-Country Flight in a Solar-Powered Plane]

Each leg of the expedition will be streamed live on Solar Impulse's website. The live feed will feature information on the airplane's position, altitude and speed, as well as camera views from inside the cockpit and Solar Impulse's mission control center.

Solar Impulse, which receives power from solar panels and onboard batteries, is the first aircraft capable of flying day and night without using any fuel, according to company officials. The aircraft weighs about the same as a station wagon, and its solar panel-covered wings stretch about as long as a 747 jetliner. The solar-powered plane generates roughly the same amount of power as a small scooter, company officials have said.

The unprecedented coast-to-coast flight is designed to demonstrate the potential for "clean technologies" as viable and efficient sources of renewable energy.

While commercial flights aboard solar-powered airplanes may still be decades into the future, the Solar Impulse journey may one day serve as a model for sustainable air travel.

The coast-to-coast expedition will also launch an initiative called "Clean Generation," which aims to promote the use of clean technologies around the globe. The program seeks to "encourage governments, businesses and decision-makers to push for the adoption of clean technologies and sustainable energy solutions," Solar Impulse officials said in a statement.

These and other supporters of the initiative will be able to add their names to a list that will be carried in the cockpit of the Solar Impulse plane, signifying them as virtual passengers on the journey. In the stopover cities throughout the trip, more names will be added, company officials said.

In 2010, the Solar Impulse plane successfully completed a 26-hour overnight flight, followed by a flight from Switzerland to Morocco in 2012. Solar Impulse's founders eventually plan to circumnavigate the world in the solar-powered plane.