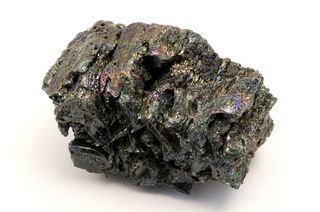 Silicon is the element to thank for the computer you're using to read these words. A crucial component in microelectronics and computer chips, this extremely common element is also responsible for warm, white beaches — silica, an oxide of silicon, is the most common component of sand.

Silicon is the seventh-most abundant element in the universe and the second-most abundant element on the planet, after oxygen, according to the Royal Society of Chemistry. About 25 percent of the Earth's crust is silicon. Besides computer chips, silicon has many uses; weirder spots where this element appears include menstrual cups, breast implants and oven mitts — in the form of silicone.

What makes silicon so special that is has an entire valley in California named after it? Read on.

In nature, silicon is no loner. It's usually found linked up with a pair of oxygen molecules as silicon dioxide, otherwise known as silica. Quartz, an abundant ingredient in sand, is made up of non-crystallized silica.

Silicon is neither metal nor non-metal; it's a metalloid, an element that falls somewhere between the two. The category of metalloid is something of a gray area, with no firm definition of what fits the bill, but metalloids generally have properties of both metals and non-metals. They look metallic, but conduct electricity only intermediately well. Silicon is a semiconductor, meaning that it does conduct electricity. Unlike a typical metal, however, silicon gets better at conducting electricity as the temperature increases (metals get worse at conductivity at higher temperatures).

Silicon was first isolated in 1824 by Swedish chemist Jöns Jacob Berzelius, who also discovered cerium, selenium and thorium, according to the Chemical Heritage Foundation. Berzelius heated silica with potassium to purify silicon, according to the Thomas Jefferson National Accelerator Facility, but today the refinement process heats carbon with silica in the form of sand to isolate the element.

Silicon is a main ingredient in very low-tech creations, including bricks and ceramics. But the high-tech stuff is where the element really makes its mark. As a semiconductor, silicon is used to make transistors, which amplify or switch electrical currents and are the backbone of electronics from radios to iPhones.

Silicon is used in various ways in solar cells and computer chips, with one example being a metal-oxide-semiconductor field effect transistor, or MOSFET, the basic switch in many electronics. To make silicon into a transistor, the crystalline form of the element is adulterated with trace amounts of other elements, such as boron or phosphorous, according to Lawrence Livermore National Laboratory. The trace elements bond with the silicon atoms, freeing up electrons to move throughout the material, according to the University of Virginia.

By creating spaces of unadulterated silicon, engineers can create a gap where these electrons can't flow — like a switch in the "off" position.

To turn the switch to "on," a metal plate, connected to a power source, is placed near the crystal. When the electricity flows, the plate becomes positively charged. Electrons, which are negatively charged, are drawn to the positive charge, allowing them to make the leap across the pure-silicon segment. (Other semiconductors besides silicon can be used in transistors, as well.)

Today's silicon research sounds just short of sci-fi: In 2006, researchers announced they had created a computer chip that melded silicon components with brain cells. Electrical signals from the brain cells could be transmitted to the electronic silicon components of the chip, and vice versa. The hope is to eventually create electronic devices to treat neurological disorders.

A 2018 study appearing in Nature tests a new type of quantum device made from silicon. Quantum computers may someday become the norm, outperforming current computer technology with the ability to perform calculations in parallel. Creating these devices using the same techniques to build traditional silicon chips could accelerate the development of these devices, potentially leading to new uses for quantum devices.

Silicon also has promise in the creation of incredibly tiny lasers called nanoneedles, which can be used to transmit data faster and more efficiently than traditional optical cables. Superconductor lasers shed heat much easier than glass lasers, said John Badding, a materials chemist at Penn State University. That means they can boast more power than traditional lasers.

Badding and his team are also working to create next-generation optical fibers that integrate superconductors instead of simply glass, he told Live Science.

"Semiconductors have a whole variety of properties that you just can't get with glasses," Badding said. Having semiconductor materials embedded in optical fibers would allow for mini-electronics included in these cables, which are crucial for sending information over long distances. Semiconductor cables would also allow for the manipulation of light in the fiber, Badding added.

Traditional silicon chips are made by depositing layers of the element on a flat surface, usually starting with a precursor gas such as silane (SiH4) and allowing the gas to solidify, Badding said. Cables, on the other hand, are drawn. To make a glass fiber optic cable, you would begin with a glass rod, heat it and then draw it out like taffy, lengthening it into a long, skinny thread.

Badding and his colleagues have figured out a way to get semiconductors into this spaghetti-like shape. They use drawn-glass fibers with tiny holes and then compress gases such as silane under high pressures to force them into those spaces.

"It'd be like filling a garden hose that goes from Penn State to New York completely solid with silicon," Badding said. "You'd think things would get plugged up and messed up, but they don't."

The resulting semiconductor strands are three to four times thinner than a human hair. Badding and his team are also experimenting with other semiconductors, such as zinc selenide (zinc and selenium) to create fibers with capacities never seen before.