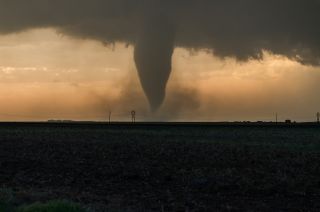 There are a lot of tall tales surrounding tornadoes, some rooted in fact and others based on fiction. One popular story suggests that the strong winds of a tornado can blow a single piece of straw straight into a tree trunk. But how does this legend hold up in the real world?

According to the National Oceanic and Atmospheric Association (NOAA) Storm Prediction Center, the old straw story is just a lot of hot air. However, NOAA does concede that the intense winds generated by a tornado are capable of twisting trees, which may create cracks in their trunks in which straw can get stuck. If the tree straightens with the straw still wedged in one of these cracks, it might appear as though the straw pierced the bark of the tree.

Discovery Channel "MythBusters" Adam Savage and Jamie Hyneman put this bit of folklore to the test in 2006 in an experiment involving an enormous air gun, a piece of straw and a palm tree. The straw reached speeds of 320 mph (515 kilometers/hour) before wedging itself just a quarter of an inch (0.6 centimeter) into the trunk of the palm. And since the most severe tornadoes in recorded history have only reached wind speeds of 205 mph (330 km/h), it's unlikely that a twister could ever re-create this damage.