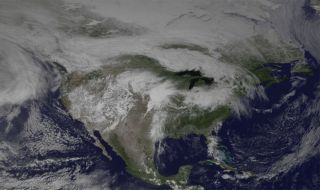 The GOES East satellite took this image of the weather system over the central part of the country at 20:45 GMT (4:45 p.m. ET). The system is generating multiple tornadoes and hailstorms.
(Image: © NOAA)

Video from a NASA satellite captured the tornado outbreak over the Great Plains earlier this month that resulted in 135 tornado reports and 124 warnings over just two days.

Between April 14 and 15, tornadoes and hailstorms popped up across parts of Kansas, Nebraska and Oklahoma as the result of a collision of two air masses: Dry air from over the Mojave Dessert crashed into moist air from the Gulf of Mexico. When these two different types of air meet, the ideal conditions for convection, and thus severe thunderstorms, is created.

Spring is a transitional weather period, so warm and cold air masses often collide over this region frequently during the season. Last year, April saw a devastating outbreak of tornadoes that hit across Dixie Alley, setting a record for number of tornadoes in one month.

In video form, the GOES-13 satellite data shows forecasters how the area of severe weather was developing, helping to prompt watches and warnings.

"The animation runs through the period of April 14-15, 2012, and the GOES imagery reveals the strong flow of warm, moist air from the Gulf into the advancing cold front," said Dennis Chesters of NASA's GOES Project in a statement.

The destructive outbreak began early Saturday evening (April 14) and lasted through Sunday morning, and appears halfway through the GOES video, when the long streak of clouds springs into view in the middle of the frame. Although there is not much detail in the infrared-only cloud tops, there is evidence of sudden violence.

Meteorologists had predicted the setup for severe weather days in advance. The NOAA Storm Prediction Center sent out the alert to several states — including Nebraska, Kansas, Iowa, Oklahoma, Missouri, Texas and Illinois —to be on guard for developing "extremely dangerous" or "catastrophic" weather conditions.

Six fatalities were reported from the outbreak, with 213 severe weather reports.