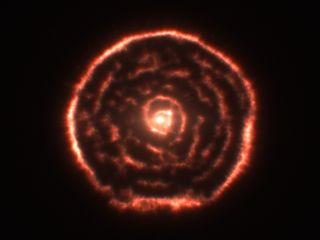 The National Science Foundation (NSF) faces several years of stagnating or even shrinking funding, even as the bills for major new telescopes, such as the Atacama Large Millimeter Array (ALMA) in Chile's Atacama Desert, come due.

As a result, some older telescopes, such as the Very Long Baseline Array and several at the Kitt Peak National Observatory, may not receive funding from NSF's Division of Astronomical Sciences. While that doesn't guarantee the telescopes' closure, it almost certainly means that astronomers won't be able to sign up for observation time on these majestic sky-watchers, said Daniel Eisenstein, an astronomer at Harvard University and co-author of a report on the NSF's astronomy budget that recommended defunding the telescopes.

In fact, U.S. science agencies are in limbo after the fiscal deal finalized Jan. 1 delayed a decision on budget cuts for two more months.

"We're fortunate to be constructing some major new facilities," Eisenstein said. "That money has to come from somewhere, and the size of the pie is decreasing."

Eisenstein's team looked at two scenarios, discovering that, even in the best-case scenario, funding for astronomy would drop in the next few years and only rebound to the levels from fiscal years 2010 to 2012 in the year 2022. In the worst-case scenario, funding would drop by 20 percent relative to the last three years and stay at that lower level for the next decade. The committee didn't foresee funding growing in even the most optimistic scenario.

At the same time, U.S. tabs for new projects like the ALMA, which will probe the heavens billions of light-years away, and Hawaii's Advanced Technology Solar Telescope, which will study the sun, come due in the next five years. [See Amazing Photos from ALMA]

Eisenstein's report recommended dropping funding for the Very Long Baseline Array, as well as several telescopes at the Kitt Peak National Observatory in Arizona, including the Mayall 4-meter telescope, the McMath-Pierce Solar Telescope, and the Wisconsin Indiana Yale 3.5-meter telescope. The Green Bank Telescope in West Virginia would also likely stop receiving funding by 2017, but final recommendations will have to come by the end of 2013 in order to work those closures into future budgets.

Instead, the report placed high priority on funding the Large Synoptic Survey Telescope, which photographs the entire sky, and continuing work on the Arecibo Observatory in Puerto Rico and Chile's Victor Blanco 4-meter telescope, which holds a 570-megapixel dark-energy camera.

The cuts are necessary in order to prevent a catastrophic reduction in the number of individual grants available for astronomers, Eisenstein said.