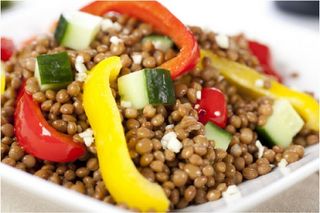 Yes, the rumors were true. The United Nations has named 2013 the International Year of Quinoa!

Why? Because quinoa (pronounced "KEEN-wah") is one of the most nutritious foods on the planet, cooked like rice, gluten-free, and loaded with vitamins and minerals. Even NASA is considering quinoa for long-duration planetary space flights … perhaps as an apology for its Tang years.

Quinoa, an ancient crop grown mainly for its seeds, is really a food for modern times. Its high-protein, low-sugar, gluten-free profile makes it an ideal diet food for nearly anyone but particularly for diabetics and those with celiac disease or similar gluten sensitivities. [The 7 Perfect Survival Foods]

A 2010 review in the Journal of the Science of Food and Agriculture described quinoa as "an excellent example of 'functional food' that aims at lowering the risk of various diseases," including heart disease, cancer and the aforementioned diabetes. You can add antioxidant to the list of accolades, as well.

Although often categorized as a whole grain, quinoa is genetically distinct from grains such as corn and wheat. It is a cousin to beets, spinach and lambsquarters, an edible "weed" most city dwellers walk by daily; and, indeed, quinoa's leaves also are edible and nutritious. But, quinoa contains all the virtues of a whole grain — helps control cholesterol, arterial plaque and weight gain — without the issues, such as poor digestion, some folks have with whole grains.

Once considered a junk crop by the Spanish conquistadors, quinoa now comes with an air of gourmet, available only in health-food stores and high-end groceries. So, the biggest problem in getting quinoa into your diet could be its high price, usually more than three times the price of most grains.

This high price for quinoa has been a double-edged sword for its producers. The recent U.S. demand for quinoa has sent the price soaring, initially a boon for poor farmers in Bolivia and Peru, where quinoa grows so easily at high altitudes and near-desertlike conditions. But the foreign demand now has made quinoa an export crop too expensive for that same local population, where it has been a staple for perhaps millennia.

Ironically, the Bolivian government has reported a possible rise in malnutrition in quinoa-growing regions as a result. Traditional relationships between farmers and llama herders also are frayed.

The United Nations, not entirely blind to the complications of world food markets and the pressure on fragile ecosystems and traditional societies, hopes that its international year designation will "heighten public awareness of the nutritional, economic, environmental and cultural properties of quinoa," for its indigenous growers, as stated in the Resolution adopted by the U.S. General Assembly.

Meanwhile, North American farmers are attempting to grow quinoa along the Rocky Mountain Range from Colorado to Saskatchewan. If they succeed, and if supply can meet demand, then prices might fall … perhaps in time for the 2014 U.N. International Year of Crystallography.