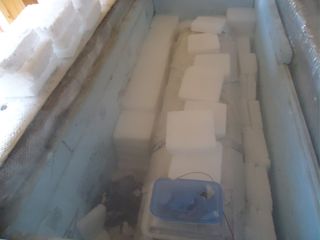 DENVER — For nearly two decades, Bo Shaffer has been hauling hundreds of pounds of dry ice each month up to a remote shed in Nederland, Colo., where he's keeping an unusual specimen on ice: the body of Bredo Morstoel, better known as the "Frozen Dead Guy."

Morstoel, a Norwegian, died of a heart attack in 1989 and has been kept frozen ever since at the behest of his grandson, Trygve Bauge. The corpse has inspired fascination, municipal legislation and even an annual festival, Frozen Dead Guy Days.

But now the fate of Colorado's Frozen Dead Guy is in limbo after an argument between Bauge and Shaffer. The caretaker is threatening to quit over disagreements about payment and procedure for keeping Morstoel frozen. Bauge in turn is talking of moving the corpse to Michigan.

"He refuses to pay what it takes to do this," Shaffer said of the grandson. "I've been after him for over two years for a raise, and he refuses to come up with it."

Bauge, who lives in Norway, tells a slightly different story, citing communications problems and saying Shaffer has not been adding enough dry ice to the freezer holding his grandfather's sarcophagus.

The disagreement highlights one of the troubles of cryonics, the preservation of human bodies for later reanimation by future technology, should such technology ever be developed. This particular trouble is that freezing a body indefinitely is complicated and expensive. [8 Wild Alternatives to Burial]

Tale from the cryonic crypt

The idea of cryonics has been bandied about for hundreds of years, but it wasn't until the 1960s that it really took off. In 1964, a man named Evan Cooper founded the Life Extension Society, dedicated to promoting freezing the dead in hopes that later medical technology could revive them.

Morstoel was aware of his grandson's interest in cryonics, Bauge says, but did not know that he himself would be frozen — "though he once expressed a gut feeling" that he wouldn't be getting a regular burial, Bauge wrote in an email to reporters.

Few places in the world allow indefinite storage of frozen corpses, Shaffer told LiveScience, so Morstoel's body was shipped to Trans Time cryonics, a facility in Oakland, Calif. There it stayed frozen for four years in a steel sarcophagus surrounded by liquid nitrogen. Then Bauge and his mother had Morstoel moved to Colorado, where they planned to start their own cryonics facility.

That never got off the ground, and Bauge was deported to Norway in 1994 over visa issues.

That's when Shaffer entered the picture. Shaffer first learned of the frozen heart attack victim and his grandson from the local newspaper. When Bauge turned up on a futurist email listserv Shaffer subscribed to, Shaffer contacted the grandson directly.

"After a couple of emails, he said, 'How would you like a job?' and that's how it all started," Shaffer said.

Ever since, Shaffer and an assistant have been making dry ice runs to the shed in Nederland, where Grandpa Bredo, as he's known, rests in a homemade freezer made of plywood and dense insulation. Keeping the corpse cool requires about 1,700 pounds (771 kilograms) of dry ice per month. Shaffer sometimes give tours of the shed, though the body is not visible from inside the steel sarcophagus. An ordinary window thermometer monitors the temperature inside this makeshift cryonic chamber.

The fact of the corpse's presence in Nederland was discovered during Bauge's deportation. At first, local residents were disturbed, and the city passed a law prohibiting the storage of frozen bodies. Morstoel was grandfathered in, however, and has since become a local celebrity. In 2002, the town began throwing a March festival, Frozen Dead Guy Days, featuring music, tours of the shed and coffin races.

It's not clear how well the preservation scheme is working, as no one has opened up the sarcophagus to check. According to Shaffer, the corpse went unpreserved for two or three days after death, suggesting cellular damage from decomposition occurred before Morstoel's body was ever frozen.

"I really don't know what the status is in there, and in a way, that's why nobody puts them in glass boxes," Shaffer said.

The temperature of dry ice (solid, compressed carbon dioxide) is about 109 degrees below zero Fahrenheit (minus 78.5 degrees Celsius), which Bauge acknowledges may be "a little too warm to stop all biological activity or freeze all fluids." Cryonic freezing is normally done with liquid nitrogen, which is between minus 346 F and minus 321 F (minus 210 C and minus 196 C). Nevertheless, Bauge said, the hope is to preserve enough of his grandfather's DNA so Morstoel can be cloned when the technology becomes feasible.[Top 10 Weird Ways We Deal with the Dead]

"By trying to maintain his full body, we are hoping to make it easier for my mother, me and others to be frozen, stored, cloned and brought back in full body under more ideal circumstances," Bauge wrote.

According to Shaffer, the current trouble with Grandpa Bredo began several weeks ago, when he contacted Bauge about an unexpected surcharge from the dry ice company. Shaffer gets paid $800 a month to maintain Morstoel's body. About half of that used to go to dry ice, resulting in a rate of $100 an hour for the four-hour job, Shaffer said. But gas costs have gone up, and the summer's heat wave forced him to buy more ice to keep the cryonic chamber cold. Last month, Shaffer said, he netted less than $100 total on the ice run. [The Top 10 Immortals]

Bauge, for his part, says he asked Shaffer for clarification about the ice surcharge and received a resignation message in an email account  he checks only once a month. By the time the two got in contact about the next dry ice run, Bauge said, he had already begun looking to replace Shaffer. He accused the caretaker of adding less ice than he requests and failing to send ice run reports to him in a timely manner. Schaffer disputes these allegations.

A dozen applicants have contacted him for the job, Bauge said. Today (Sept. 27) Bauge was emailing contacts in Nederland, along with media, about the possibility of breaking into the shed to check the ice levels.

The long-term plan, according to Bauge, is to find a replacement for Shaffer and then move his grandfather to a cryonics facility in Michigan in 2015.

If the payment dispute is resolved, Shaffer says he would be willing to continue the dry ice runs until Morstoel's body leaves town. And he expects Frozen Dead Guy Days to continue regardless of what happens.

Shaffer exhibits little sentimentality at the prospect of seeing his frozen charge go. He's spoken to psychics about the Frozen Dead Guy's spirit, he said, and the last psychic he met convinced him Morstoel's spirit has moved on.

"She says, 'You know, for years I felt Grandpa Bredo around, but I ain't felt him around lately," Shaffer said.