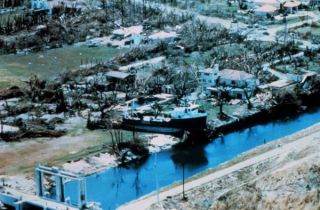 Two days before Hurricane Andrew made landfall in south Florida on Aug. 24, 1992, hurricane forecaster Frank Marks piloted an airplane around and above the hurricane, sampling wind speeds. By the time he got back to Miami, it was clear the storm wasn't weakening.

"It didn't look good. I went home and told my wife: 'We have to get ready.'" He rode out the storm at home, he said, along with six family members and friends (and a dog) crowded into a small bathroom, the safest room in the house.

Andrew caused one of the worst natural disasters in U.S. history when it made landfall as a Category 5 storm, devastating south Florida. The storm killed 15 people, leveled more than 100,000 houses in Miami-Dade County alone and racked up an estimated $26 billion in damages, according to the National Oceanographic and Atmospheric Administration (NOAA), where Marks worked at the time. It was the costliest U.S. hurricane on the books until Katrina.

While hurricanes remain difficult to predict, especially because they can suddenly intensify in ways that are poorly understood, hurricane forecasting has come a long way since 1992. [History of Destruction: 8 Great Hurricanes]

Forecasting has essentially two components: where the hurricane is going (called its track) and how strong it is (its intensity). In 1992, hurricane forecasts were issued to only three days, but now they are issued to five — and soon they will be given for up to a week, said Rick Knabb, director of NOAA's National Hurricane Center (NHC).

Track forecasts have improved due in part to the increased numbers of satellites, outfitted with more sophisticated weather-monitoring devices. At the same time, supercomputing power has increased exponentially, and computer models used to forecast a cyclone's direction keep improving. NOAA also has more aircraft available to it, with better instruments.

In 1992, there were basically only two ways to gauge hurricane intensity: measuring wind speed near the storm with aircraft at 10,000 feet (3,000 meters), and using the Dvorak satellite technique, according to NOAA. The latter technique compares a current image of a hurricane with pictures of previous storms and computes the tempest's probable intensity. It's still used to gauge intensity of hurricanes that form east of the Caribbean, beyond which airplanes can't reach because they run out of fuel.

At this time researchers were still using statistical models in their forecasts, although they had just begun using more advanced dynamical models, Knabb said. Dynamical models are better at predicting the probability of future events based upon current conditions; statistical models find patterns in past events that don't necessarily apply to future ones, since all cyclones are different. Since then, more advanced dynamical models and the exponential growth of supercomputers have greatly helped improve hurricane forecasts, cutting the one-day hurricane track errors in half, he said, meaning that forecasters have improved their ability to know where a hurricane is heading.

The increase in the number of satellites available to focus on weather and the development of advanced monitoring instruments on these spacecraft, have also helped immensely. These devices measure variables like seasonal weather patterns, ocean currents and temperature, all of which affect hurricane formation and where hurricanes will hit, according to NOAA.

Satellites also greatly expand the scope of hurricane hunters, but aircraft still perform many functions satellites cannot. In the mid-1990s NOAA began dropping GPS-enabled recording instruments into hurricanes. These devices, called dropsondes, are able to measure wind speed and direction, temperature, dew point and pressure from the point at which they're dropped all the way to the ocean surface. That enabled forecasters to glean a lot more information about the storms' intensity and future direction.

These instruments are often dropped by NOAA's Gulfstream-IV aircraft, which can fly for nearly nine hours in and around storms, from a height of 45,000 feet (about 14,000 m). Their measurements have improved the 12- to 48-hour track forecasts by 10 to 15 percent, NOAA officials said.

To measure wind speeds at the surface of approaching storms, a device called a SFMR (Stepped Frequency Microwave Radiometer) was installed on the U.S. Air Force C-130J hurricane-hunter aircraft in 2007. Affectionately known as "Smurf," the device calculates wind speed by measuring the amount of microwave radiation naturally emitted from foam whipped up by winds at the ocean's surface, according to NOAA. Previously, winds could be directly measured only by airplanes at high altitudes. This adds an important dimension to researchers' understanding of the storm — how intense it is and where it will go.

Predicting the path a hurricane will take is no easy task, but forecasters have gotten much better. In 1992, the average error at three days was about 300 miles (480 kilometers) moving forward along either side of its current direction and position — that's been reduced threefold, NOAA says. At five days out, the typical track error now is about 250 miles (400 km), about as accurate as the 3-day forecast was 12 years ago.

Much of the improvement comes from faster computers and better models, which allow for more accurate predictions of a storm's behavior. NOAA has two supercomputers to run simulations of storms.

Forecasters determine a storm's path and intensity by integrating all of the satellite, aircraft and ground-based weather data into these supercomputer models. At the National Hurricane Center, the latest models can visualize a developing storm in 3D, but forecasters also run simple statistical models based on the tracks of past hurricanes. Plotted altogether on a map, these legacy predictions and cutting-edge forecasts result in a confusing tangle of storm tracks that can look like cooked spaghetti.

The job of a hurricane forecaster is to interpret these models and build on their own experience to produce the most likely forecast for an actual storm, said David Zelinsky, a meteorologist at the center.

A NHC forecaster will determine a storm's path and intensity for five to seven days. Hurricane forecasts are updated every six to 12 hours.

In 2002, the NHC also introduced the "track cone," which represents the hurricane's likely path, and shows the range of possible routes the storm could take, with the path down the center of the cone being the most likely path the storm will take.

During the relatively quiet winter months, NHC teams spend hours tweaking their numerical models to upgrade and improve the next year's forecasts for next year, Zelinsky said. "We always try to stay a step ahead."

Most hurricane damage and deaths come from flooding, not from strong winds. But until 2014, the storm warnings from the NHC were issued solely for the threat of wind speed.

In 2014, the Hurricane Center introduced experimental warnings for storm surge, the rise in sea level that can accompany hurricanes and arrives ahead of them. The flooding often inundates low-lying coastal areas and can reach far inland. Storm surge can occur well outside the warning area for a hurricane. The system will receive its official roll out in 2015.

The experimental warning maps show where storm surge flooding could occur, and how high above ground the water could reach in those areas. [Watch: Storm Surge: The Deadliest Part of a Hurricane]

"Storm surge is often the greatest threat to life and property from a hurricane," NHC spokesman Dennis Feltgen said. "However, many people do not understand this term or the threat it represents. The interactive maps show how much water can be expected in a worse case scenario."

There are still many challenges to further improving hurricane forecasts. Predicting the intensity of a hurricane remains the biggest obstacle, and it "basically hasn't improved since Hurricane Andrew," Knabb said. That's due to a lack of understanding of the physics that controls these massive systems, he said. Hurricanes are enormously complex and very difficult to study and see inside of, because they are so large and powerful.

One thing researchers don't understand is when and why hurricanes' eyes are replaced, a stage of cyclone development in which the eye widens and the storm weakens.

Communicating uncertainty is also very difficult, although forecasters have improved by collaborating with sociologists, said Max Mayfield, a hurricane specialist with WPLG-TV Miami who was at the NHC at the time of Andrew. Most important, NHC alerts have become more clearly written than before, and the important information is at the top of the alert so it can be quickly read and understood, Feltgen said. [5 Hurricane Categories: Historical Examples]

No matter what forecasters come up with, citizens need to make their own plan, pay attention to announcements from the NHC and take responsibility for their own safety, Mayfield said.

"We have to get past the mindset that 'it couldn't happen to me,'" Knabb said. "Storms like Andrew remind us how bad [hurricanes] can be."