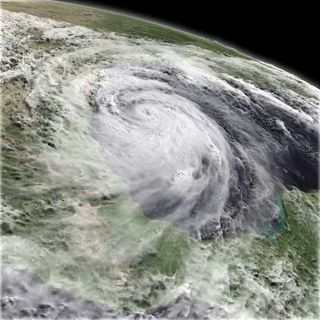 The first Atlantic hurricane of the year, Hurricane Alex, on June 30 — an unusually early debut for a hurricane. NOAA predicts that 2010 could be one of the more active seasons on record.
(Image: © National Oceanic and Atmospheric Administration.)

Galveston, Texas, is the site of the deadliest weather disaster in U.S. history. In 1900, a hurricane sent walls of water surging across the island, killing an estimated 8,000 people.

Two years ago, in 2008, Hurricane Ike devastatedthe town once again, leaving almost 75 percent of the island underwater. Only this time, most people managed to escape the storm's wrath — because of technological advances, they knew when it was coming.

Thanks to modern technology and computer modeling, forecasters can predict storms with increasing accuracy. But in many ways hurricanes remain mysterious and erratic beasts, difficult to track, and packing mercurial might.

A massive research project this summer may help reveal some of the storms' best-kept secrets. Researchers sponsored by three government agencies — NASA, the National Oceanic and Atmospheric Administration (NOAA), and the National Science Foundation (NSF), will swarm the skies of the tropical Atlantic Ocean with specially outfitted planes in an effort to better understand how — and why — tropical cyclones form in the first place.

Christopher Davis, a scientist with the National Center for Atmospheric Research (NCAR), said one crucial question the researchers hope to help answer is why some storms grow and turn deadly, while others fade away with relatively little fuss.

"The idea here is if we can come up with what is the essential distinguishing characteristic between storms that develop and storms that do not, it may tell forecasters what they really need to look for,"Davis said.

Davis is lead investigator for the effort, called the PREDICT (Pre-Depression Investigation of Cloud Systems in the Tropics) study, based out of St. Croix in the U.S. Virgin Islands, which will use a G-V jet that can fly for a distance of 7,000 miles (11,300 kilometers) at analtitude of 43,000 feet (13,100 meters), high above the storms' reach.

On twice-daily flights, scientists will toss from the plane small, instrument-laden parachutes (called dropsondes), which will hurtle down through whatever storm systems researchers can find, sending back information on everything from temperature to wind speed to humidity.

Davis told OurAmazingPlanet that it's this latest data set — humidity — that is of particular interest to his team.

Hot winds travel to the tropical Atlantic all the way from the Sahara, Davis said, carrying dust and dry air with them in thick plumes."There's pretty strong evidence that if the dry air is ingested into a developing system, it's less likely to develop," he said. "It can reallymatter."

And, he added, it's one of those things a satellite just can't see very well, which is why the data-gathering flights are so important.

In addition to PREDICT's G-V jet, six additional aircraft, three fromNASA and three from NOAA, will coordinate their flight paths to soar through, above, and around storms from mid-August through the end of September, gathering an unprecedented amount of data during the height of the Atlantic and Gulf hurricane season.

One of PREDICT's aims is to extend the current five-day limit on hurricane forecasting out to seven days, a goal that the National Hurricane Center's Dennis Feltgen said should be within reach within thedecade.

"We've made tremendous strides in track forecasting," Feltgen said. "Our five-day forecast is as accurate as our three-day track forecast just 15 years ago."

And while track forecasting — the ability to predict where a storm isheading — has improved dramatically over the years, Robert Rogers, field program director for NOAA's hurricane study, said improvements in predicting how the intensity of a storm will change has lagged behind.

"It's very important for emergency managers," Rogers told OurAmazingPlanet. "The nightmare scenario is a Category One [hurricane] is approaching the Gulf coast, and then suddenly overnight it turns intoa Category Four." (Hurricanes are ranked on the Saffir-Simpson scale ofintensity, which rates hurricanes based on ranges of wind speeds. The lowest category is Category One, the highest is Category 5.)

Ultimately, researchers said, improved computer modeling is a huge priority. All the new information on storm formation can be used to makesure computers and forecasters are looking at the right data when they formulate predictions.

"It's very complex," said NCAR's Davis. "There's a tremendous amount of information available that they have to pick through. If we can say, 'This is the part that really matters,' they might be able to narrow that down."

This article was providedby OurAmazingPlanet, sister site to LiveScience.