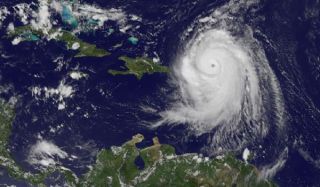 Danny formed when a tropical depression crossed Cuba into the Gulf of Mexico, where it rapidly intensified into a tropical storm and then a hurricane. It fell back to tropical storm status shortly after hitting shore.

Impact: Danny produced an outbreak of 39 tornadoes and flash flooding across the Gulf Coast and Southeastern United States. It caused $100 million (1985 USD) of damage and three fatalities, two of them directly related to the storm. Danny quickly downgraded to a tropical storm as it crossed over onto land. [How Do Hurricanes End?]

Formed from a tropical wave (a type of low-pressure atmospheric trough that moves east to west) that crossed the Atlantic from Africa, Erin's intensity grew as it passed from Jamaica up to Florida's Atlantic coast. It gained windspeed in the Gulf and struck the Florida panhandle and Georgia as a category 2 hurricane.

Impact: In Jamaica, heavy rains caused a plane crash that killed five people. There were six drowning deaths along Florida shores. The total monetary damage from Erin was $700 million (1995 USD), primarily from downed trees, crop damages and ship damages. Erin caused NASA to halt some activities and preparation of shuttles at Kennedy Space Center. [How Are Hurricanes Named?]

Katrina formed over the Southeastern Bahamas and passed over land into the Gulf of Mexico. There it experienced unusually warm waters, and rapidly escalated to a category 5 hurricane before scaling down to a Category 3 upon hitting land.

Impact: At least 1,836 people died in the actual hurricane and in the subsequent floods caused by the levee system breaking in New Orleans. This made it the deadliest U.S. hurricane since the 1928 Okeechobee hurricane; total property damage was estimated at $81 billion (2005 USD). [What If Hurricane Katrina Hit New Orleans Today?]

The storm's origins are unclear because of the limited observation ability at the beginning of the 20th century. Ship reports were the only reliable tool for observing hurricanes at sea. Based on those, the 1900 storm, like many powerful Atlantic hurricanes, is believed to have begun as a Cape Verde-type hurricanea tropical wave moving off the western coast of Africa.

Impact: The powerful winds and a 15-foot storm surge destroyed at least 3,500 homes and buildings and killed more than 8,000 people, making this hurricane one of the deadliest in history. Galveston residents did receive warnings about the coming storm from the U.S. Weather Bureau, but because satellites didn't exist, there was no way to predict its path ahead of time, and no one was certain it was really coming (and so people did little to prepare). [Why Do Hurricanes Curve Out to Sea?]

Andrew was the only major hurricane in the otherwise inactive 1992 hurricane season, but it was hugeone of only a handful of Category 5 storms ever to hit land. It formed from a tropical wave that moved off the coast of Africa, and intensified into a hurricane near the Bahamas. It passed over Southern Florida and into the Gulf, hitting landfall again in Lousiana.

Impact: Andrew caused $26.5 billion in damage (1992 USD, $41.5 billion 2011 USD), with most of that damage cost in south Florida, which it struck at Category 5 strength. Approximately 1 million people were evacuated from the area before the storm, so despite the tremendous destruction of property, only 54 people died. In the Florida Everglades, 70,000 acres of trees were knocked down by the storm. In addition, the storm killed approximately 182 million fish in the basin by increasing the turbidity of the water and lowering its oxygen level. [Why Are Category 5 Hurricanes So Rare?]