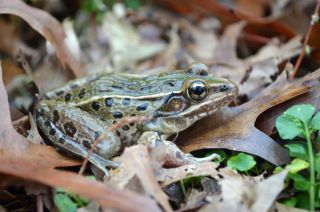 A new species of frog has been found hiding in plain sight in one of the busiest places on Earth: New York City.

For years, biologists mistook the frog for a more widespread variety of leopard frog. This one, however, prefers not to stray far from the Big Apple and has an unusual croak. The frog lives in the city's ponds and marshes — sometimes within view of the Statue of Liberty — so uncovering the frog's true identity was a surprise for scientists.

"For a new species to go unrecognized in this area is amazing," said biologist Brad Shaffer of UCLA. "This shows that even in the largest city in the U.S., there are still new and important species waiting to be discovered."

The newly identified wetland species likely once lived in Manhattan, but the amphibian's range has since declined. It's now only known from being identified in a few nearby locations: Yankee Stadium in the Bronx is the center of its current range.

Scientists began suspecting that the frog was unusual because of its strange-sounding calls, which differ from the calls of other leopard frogs. Instead of the "long snore" or "rapid chuckle" heard from other leopard frogs, this frog had a short, repetitive croak, said study team member Jeremy Feinberg of Rutgers University in New Jersey.

"When I first heard these frogs calling, it was so different, I knew something was very off," Feinberg said.

The results were clear-cut: the DNA was distinct, no matter how much the frogs looked alike.

"If I had one of these three leopard frogs in my hand, unless I knew what area it was from, I wouldn't know which one I was holding because they all look so similar," said study team member Cathy Newman of Louisiana State University. "But our results showed that this lineage is very clearly genetically distinct."

The newly identified frogs have so far been found in scattered populations in northern New Jersey, southeastern mainland New York and on Staten Island. Although they may extend into parts of Connecticut and northeastern Pennsylvania, and evidence suggests they were once common on Long Island, the frogs have since gone extinct in these areas.

Until scientists settle on a name for the frog, they refer to it as "Rana sp. nov.," meaning "new frog species."

The study of the new frog species is published in a recent edition of the journal Molecular Phylogenetics and Evolution.