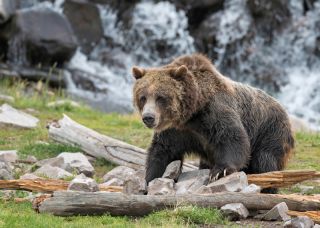 Bears are members of the Carnivora order, but they are omnivores — they eat meat and plants.
(Image: © Nagel Photography/Shutterstock)

Omnivores are the most flexible eaters of the animal kingdom. They eat both plants and meat, and many times what they eat depends on what is available to them. When meat is scarce, many animals will fill their diets with vegetation and vice versa, according to National Geographic.

Animal omnivores (including humans) come in many different sizes. The largest terrestrial omnivore is the endangered Kodiak bear. It can grow up to 10 feet tall (3.04 meters) and weigh up to 1,500 lbs. (680 kilograms), according to the Alaska Department of Fish and Game. Kodiaks eat grass, plants, fish, berries and the occasional mammal.

Ants may be the smallest omnivores. One of the smallest ants is the pharaoh ant, which grows to only 0.04 to 0.08 inches (1 to 2 millimeters), according to the University of Michigan. They eat a variety of foods that include eggs, carrion, insects, body fluids, nuts, seeds, grains, fruit nectar, sap and fungus.

Omnivores in the food chain

Like herbivores and carnivores, omnivores are a very important part of the food chain or web. “Some nodes in that web may have dozens of strands attached to it and if you remove that node the web can begin to fall apart,” Kyle McCarthy, an assistant professor of wildlife ecology in the University of Delaware’s College of Agriculture and Natural Resources, told Live Science.

Omnivores help keep in check both animal populations and vegetation growth. Removing an omnivore species can lead to vegetation overgrowth and an overabundance of any creatures that was part of its diet.

Omnivores have very distinctive teeth that help with the digestion of their varied diets. They often have long, sharp, pointed teeth to rip and cut meat and flat molars to crush plant material.  One good example is the human mouth. Humans have canines and incisors that bite and tear into food and molars and premolars that are used to crush food. While most animals have sharper, more pointed teeth for tearing and ripping, the concept is the same.

Some omnivores, such as chickens, have no teeth and swallow their food whole, according to the Animal Nutrition Handbook. The food is softened in the stomach by hydrochloric acid and digestive enzymes. Then, the food gets broken down in the gizzard, a strong digestive muscle, and rocks that the chicken has swallowed.

Omnivores, for the most part, are somewhere in the middle. They have a limited ability to digest certain plant materials. Instead of trying to process the harder materials, though, the omnivore’s digestive tract sends the material out as waste.

Why did some animals evolve to eat meat or vegetation while others eat both? It comes down to availability of resources. “In terms of evolving to be a meat eater or plant eater, basically, any place there is available energy you will have a ‘niche’ for a species to fill in the ecosystem,” said McCarthy.