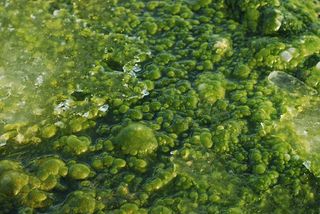 Algae may hold potential as both the food and the fuel of the future.
(Image: © bogdan ionescu, Shutterstock)

Algae are a diverse group of aquatic organisms that have the ability to conduct photosynthesis. Certain algae are familiar to most people; for instance, seaweeds (such as kelp or phytoplankton), pond scum or the algal blooms in lakes. However, there exists a vast and varied world of algae that are not only helpful to us, but are critical to our existence.

The term "algae" covers many different organisms capable of producing oxygen through photosynthesis (the process of harvesting light energy from the sun to generate carbohydrates). These organisms are not necessarily closely related. However, certain features unite them, while distinguishing them from the other major group of photosynthetic organisms: the land plants.

Primarily, algae are not highly differentiated in the way that plants are, according to the authors of "Algae: Anatomy, Biochemistry, and Biotechnology, 2nd Ed." (CRC Press, 2014). That is to say, they lack true roots, stems and leaves, and a vascular system to circulate water and nutrients throughout their bodies. Second, many algae are unicellular, according to a 2014 articlepublished in the journal Current Biology. They also occur in a variety of forms and sizes. They can exist as single, microscopic cells; they can be macroscopic and multicellular; live in colonies; or take on a leafy appearance as in the case of seaweeds such as giant kelp. Picoplankton are between 0.2 to 2 micrometers in diameter, while the fronds of giant kelp are as large as 60 meters in length. Lastly, algae are found in a range of aquatic habitats, both freshwater and saltwater.

By virtue of these characteristics, the general term "algae" includes prokaryotic organisms — cyanobacteria, also known as blue-green algae — as well as eukaryotic organisms (all other algal species). "Since "algae" do not form a natural group that has descended from a common ancestor, including cyanobacteria into the informal group "algae" is common," said Linda Graham, a professor of botany at the University of Wisconsin-Madison. "The term 'eukaryotic algae' excludes cyanobacteria." It is also interesting to note that chloroplasts, which are the site of photosynthesis in land plants, are adapted forms of cyanobacteria. These early cyanobacteria were engulfed by primitive plants cells sometime in the late Proterozoic, or in the early Cambrian period, according to the University of California Museum of Paleontology.

(Prokaryotes include bacteria and archaea. They are simpler organisms without an organized cell structure and their DNA floats freely as a tangled mass within the cytoplasm. On the other hand, eukaryotes are all other living organisms: protists, plants, fungi What Are Protists?and animals. Their cells are more organized. They have structures called organelles to execute a range of cellular functions and their DNA is housed in a central compartment called the nucleus.)

The majority of algae live in aquatic habitats (Current Biology, 2014). Yet, the word "aquatic" is almost limited in its ability to encompass the diversity of these habitats. These organisms can thrive in freshwater lakes or in saltwater oceans. They can also endure a range of temperatures, oxygen or carbon dioxide concentrations, acidity and turbidity. For example, giant kelp are found more than 200 meters below the polar ice sheets, according to "Algae," while the unicellular green algal species Dunaliella salina is found in very salty, or hypersaline, environments such as the Dead Sea, according to a 2005 review article published in the journal Saline Systems. Free-floating, mostly unicellular algae that live within illuminated regions of water are known as planktonic. Those that adhere to surfaces are known as benthic algae. Such algae grow on mud, stones, other algae and plants, or animals, according to "Algae."

Algae are also able to survive on land. Some unexpected places where they grow are tree trunks, animal fur, snow banks, hot springs (according to "Algae") and in soil, including desert crusts (Current Biology, 2014).

Mostly, algae live independently in their various growth forms (single cells, colonies, etc.), but they can also form symbiotic relationships with a variety of non-photosynthetic organisms including ciliates, sponges, mollusks and fungi (as lichens). One of the benefits of such relationships is that they enable algae to broaden the horizons of their habitats.

As a general rule, algae are capable of photosynthesis and produce their own nourishment by using light energy from the sun and carbon dioxide in order to generate carbohydrates and oxygen. In other words, most algae are autotrophs or more specifically, photoautotrophs (reflecting their use of light energy to generate nutrients).

However, there exist certain algal species that need to obtain their nutrition solely from outside sources; that is, they are heterotrophic. Such species apply a variety of heterotrophic strategies to acquire nutrients from organic materials (carbon containing compounds such as carbohydrates, proteins and fats). Osmotrophy is the absorption of dissolved substances, and phagotrophy involves engulfing bacteria or other such prey. Other algae, known as auxotrophs, need to only acquire essential vitamins such as the B12complex or fatty acids (according to "Algae").

According to the authors of "Algae," it is widely accepted that the nutritional strategies of algae exist on a spectrum combining photoautotrophy and heterotrophy. This ability is known as mixotrophy.

Algae are capable of reproducing through asexual or vegetative methods and via sexual reproduction.

These are also referred to as blue-green algae. Though they are capable of conducting oxygen-producing photosynthesis and live in many of the same environments as eukaryotic algae, cyanobacteria are gram-negative bacteria, and therefore are prokaryotes. They are also capable of independently conducting nitrogen fixation, the process of converting atmospheric nitrogen to usable forms of the element such as ammonia.

The prefix "cyano" means blue. These bacteria have pigments that absorb specific wavelengths of light and give them their characteristic colors. Many cyanobacteria have the blue pigment phycocyanin, a light-harvesting pigment (it absorbs red wavelengths of light). Cyanobacteria all have some form of the green pigment chlorophyll, which is responsible for harvesting light energy during the photosynthetic process (Current Biology, 2014). Some others also have the red pigment phycoerythrin, which absorbs light with the green region and bestows the bacteria with a pink or red color.

The eukaryotic algae are polyphyletic, meaning that they did not evolve from a single common ancestor. This is clearly demonstrated in our current understanding of the tree of life — a family tree of all living organisms organized by their various evolutionary relationships. Eukaryotic algae are found distributed among many different groups, or major branches of the tree.

Archaeplastida includes plants and a variety of photosynthetic algal species such as the chlorophytes (a subset of green algae), charophytes (mainly freshwater green algae) and glaucocystophytes (unicellular freshwater algae). Chlorophytes are the green algae that commonly form lichen partnerships with fungi.

Dinoflagellates are found within Alveolata. These are primarily unicellular marine and freshwater organisms. Many dinoflagellates have lost their plastids — the site of photosynthesis — through the course of evolution and are phagotropic or live as parasites. Still other algal species are found distributed amongst Alveolata, Excavata, Rhizaria and Chromista (Current Biology, 2014).

Probably the most important contribution of algae to our environment and well-being is the generation of oxygen through photosynthesis. "Algae are indispensable because they produce about half the oxygen in Earth's atmosphere," Graham told LiveScience.

According to a 2010 review article published in the journal Biofuels, petroleum is partially derived from ancient algae deposits. "Some very old oil deposits are attributed to cyanobacteria, though the identity of the producers is still uncertain," Graham said. "Younger oil deposits probably arose from eukaryotic marine green algae, coccolithophorids, and other microscopic marine phytoplankton." These oil deposits are a limited resource and are slowly dwindling with human use. As a result, researchers are looking into renewable alternatives.

Algal biofuels are a promising replacement for fossil fuels. All algae have the ability to produce energy-rich oils and several microalgal species naturally accumulate high levels of oil in their dry mass. Moreover, algae are found in diverse habitats and can reproduce quickly. They also efficiently use carbon dioxide. "Algae help to keep atmospheric carbon dioxide levels stable by storing [the gas] in organic materials that include oil deposits and inorganic carbonate rocks," Graham said. Green algae, diatoms and cyanobacteria are just some of the microalgal species that are considered good candidates for the production of biofuel (Biofuels, 2010).

Algae, in the form of algal blooms, get a bad rap for creating toxic conditions in oceans and lakes. "Algal blooms" refers to the rampant growth of certain microalgae, which in turn leads to the production of toxins, disruption of the natural aquatic ecosystems and increases the costs of water treatments, according to the Environmental Protection Agency (EPA). The blooms take on the colors of the algae contained within them. Graham states that the main toxin producers in oceans are certain dinoflagellates and diatoms. In freshwaters, cyanobacteria are the main toxin producers, though some eukaryotic algae also cause problems. Under natural conditions, Graham notes that algae use the toxins to protect themselves from being eaten by small animals and only need a small amount to protect themselves.

The main cause of algal blooms is a phenomenon called nutrient pollution. With nutrient pollution, there is an excess of nitrogen and phosphorus, which can push algae toward unrestrained growth. The phenomenon is caused by a variety of human activities. The fertilizers we use in agriculture and animal manures are rich in nitrogen, while improperly treated wastewater is high in both nitrogen and phosphorus, according to the EPA.

"It is a common societal perception that algae are noxious and should be eliminated at every opportunity. But that perception is wrong, because algae make oxygen, fish [they are a major source of food for aquatic organisms], oil, and many other useful materials," Graham told LiveScience. "Only a few species cause problems, and the worst of these is Homo sapiens."