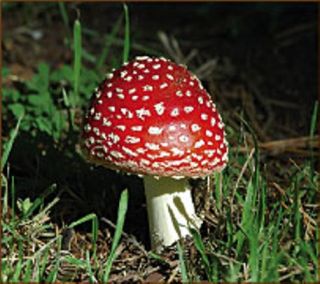 The Amanita muscaria mushroom, which is deep red with white flecks.
(Image: © USGS)

Tens of thousands of organisms, from mushrooms to mold to yeast, fall under the umbrella of fungi. Once thought simply to be plants, fungi have emerged as their own taxonomic kingdom. The various fungal species are diverse, with many unique properties: some innocuous, some useful and some harmful.

It has taken decades, as technology improved and scientific knowledge evolved, to appropriately classify this myriad group of organisms.

As recently as the 1960s, fungi were considered plants. In fact, at that time all organisms were classified into only two groups or kingdoms: plants and animals. In a 1969 article published in the journal Science, ecologist Robert Whittaker explained the basis of this two-kingdom system. For many decades in history, the only living creatures humans observed around them were either the "rooted" plants that produced their own food, or motile animals that sought out their food. Thus mobility and the method of gaining nourishment became the criteria for a system of classification. "The animals moved and plants didn't, and that's how fungi got stuck with the plants," said Tom Volk, a professor of botany at the University of Wisconsin-La Crosse.

However, unlike plants, fungi do not contain the green pigment chlorophyll and therefore are incapable of photosynthesis. That is, they cannot generate their own food — carbohydrates — by using energy from light. This makes them more like animals in terms of their food habits. Fungi need to absorb nutrition from organic substances: compounds that contain carbon, like carbohydrates, fats, or proteins.

Based on these and other properties, in 1969 Whittaker proposed that fungi become a separate kingdom as a part of a new five-kingdom system of classification. The proposed classification included a vast array of species. Among them, mushrooms, yeast, molds, slime molds, water molds, puffballs and mildews.

Since then, the system of classification and the fungal kingdom have been further refined. For example, slime molds and water molds were shuttled off to a different kingdom. Today, the members of the kingdom Fungi are also known as the "true fungi."

According to "Van Nostrand's Scientific Encyclopedia, Vol 1, 10th Ed." (Wiley, 2008), the numerous fungal species have "widely diverse habits and characteristics," and generalizations can be difficult. Nevertheless, there are a few key aspects common to all members of the fungal kingdom.

Cells: Fungi are eukaryotes, just like plants and animals. This means they have a well-organized cell, characteristic of all eukaryotes. Their DNA is encapsulated in a central structure called the nucleus (some cells can have multiple nuclei, according to "Van Nostrand"). They also have specialized cellular machinery called organellesthat execute various dedicated functions such as energy production and protein transport.

Fungal cells are encased in two layers: an inner cell membrane and an outer cell wall. These two layers have more in common with animals than plants.

Plant cell walls are made of cellulose, whereas fungal cell walls have chitin, a distinctly non-plant substance. In fact, the exoskeletons, or the outer hard shell of various arthropods (insects, and crustaceans like crabs and lobsters) are made of chitin.

The bodies of multicellular fungi are made of cells that band together in rows that resemble the branches of trees. Each individual branched structure is called a hypha (plural: hyphae). Most often, the individual cells in hyphae sit right next to each other in a continuous line (also known as coenocytic hyphae) but they can sometimes be separated into compartments by a cross wall (septate hyphae). Several hyphae mesh together to form the mycelium, which constitutes the fungal body, according to "Van Nostrand."

"The fungi are the kings of surface area," Volk told LiveScience, explaining that hyphae expand their surface area in order to take in food, facilitate digestion and also to reproduce.

Nutrition: As mentioned earlier, since fungi cannot conduct photosynthesis, they need to absorb nutrients from various organic substances around them. This makes them heterotrophs, which literally translates to "other feeding," according to Volk.

Animals are heterotrophs as well, and need to seek out their food. But in their case, digestion takes place inside the body. "Fungi are different," Volk told LiveScience. "They find their food, they dump their enzymes out on to the food, and digestion takes place outside their body." These specialized digestive enzymes are known as exoenzymes, and are secreted from the tips of growing hyphae onto their surroundings, Volk states in the "Encyclopedia of Biodiversity, 2nd Ed." (Academic Press, 2013). These enzymes are the primary reason why fungi are able to thrive in diverse environments from woody surfaces to insides of our body.

As a result of exoenzyme activity, large food molecules are broken down into smaller ones, which are brought into the hyphae. Cellular respiration then takes place inside fungal cells. That is to say, organic molecules such as carbohydrates and fatty acids are broken down to generate energy in the form of ATP.

Fungi have multiple sources of food. Fungi that feed on dead organisms — and help in decomposition — are called saprophytes. If a fungus derives sustenance from a live host without harming it, then it is called a symbiont or a mutualist. Lichens — fungi and algae together — are an example of a mutualistic relationship. If a fungus feeds on a live host while harming it, then it is a parasite, according to the "Encyclopedia of Biodiversity."

Reproduction: The various fungi are capable of reproducing asexually or sexually. Both processes can generate spores. These are special cells, which when released into a suitable environment, can give rise to a new fungal body. Spores can be carried to new environments by air or water, according to Utah State University.

Asexual reproduction occurs through mitosis, when a fungal cell divides and produces identical genetic copies of itself. In simpler, single-celled fungi like yeast, this process is known as budding. In this case, a small offshoot or bud emerges from the parent cell, slowly growing in size. The nucleus divides into two and the bud splits off once it is the same size as the parent cell. On the other hand, multicellular fungi such as molds reproduce through the formation of asexual spores.

The duration and timing of certain steps of sexual reproduction vary quite a bit between fungal species. Moreover, the reproductive structures also vary from species to species. So much so, that these morphological differences form the basis for dividing the fungal kingdom into sub-groups or phyla, according to the "Encyclopedia of Biodiversity."

Sexual reproduction in fungi produces spores through meiosis. As a result, these spores contain half the number of parental chromosomes. Once released, the spores germinate into tree-like mycelia and are ready to "mate." In the case of mushrooms, puffballs and toadstools, the branched mycelium (also called primary mycelium) is divided into segments containing a single nucleus. Mating takes place when two primary mycelia come into contact with one another and form a secondary mycelium. Each segment of the secondary mycelium has two nuclei: one from each original segment. The individual nuclei still have half the number of chromosomes as the parent cell. In the course of several steps nuclei fuse, giving rise to cells with the original number of chromosomes. After this point, the sexual reproductive cycle begins again: meiosis occurs and spores are produced, according to "Van Nostrand."

Fungi are inextricably linked to our lives and livelihoods. They affect our health, food, industry and agriculture in both positive and vexing ways.

Fungi are sources of important medication. The antibiotics penicillin and cephalosporin, as well as the drug cyclosporine, which helps to prevent transplant rejection, are all produced by fungi, according to the "Encyclopedia of Biodiversity." Yet by the same token, fungi produce toxins called mycotoxins that are harmful to us. "Almost all mycotoxins are produced by molds," Volk said. For example, Aspergillus fungi that grow on corn and peanuts produce aflatoxins. This mycotoxin is considered a carcinogen and has been linked to liver cancer.

Yeast (Saccharomyces cerevisiae) is essential to the fermentation of wine and beer, and to the baking of raised, fluffy bread. The characteristic azure hue of blue cheeses is due to the sporulation of the fungus Penicillium roquefortii, according to the "Encyclopedia of Biodiversity." Mushrooms such as chanterelles and morels are tasty additions to meals. Yet smut and rust fungi (named for the coaly and rust like appearance of their spores) routinely destroy food crops and plants like beans, barley and pine trees, according to "Van Nostrand."

Important scientific discoveries have been made using fungi as model organisms. The discovery that genes control the expression of enzymes, and that one gene controls one enzyme, was a result of experiments with the pink mold Neurospora. Scientists George Beadle and Edward Tatum won the Nobel Prize in 1958 for this work. Yeast has also been used as a model organism for answering questions in the field of genetics. According to a 1997 article published in the journal Science, many yeast and mammalian genes code for similar proteins, making it a useful tool for understanding the human genome and disease conditions such as Werner’s syndrome.

Still, what we know about fungi today, and what we can do with fungi, is just the very beginning of all that is possible. As Volk states in "Encyclopedia of Biodiversity," there are 75,000 fungal species that are named. But this number is believed to represent only 5 percent of the species that exist in nature. "There's relatively little known about the fungi compared to the animals and plants," Volk told LiveScience. "There's still a lot of new species out there to be discovered."