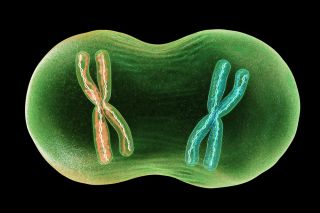 Mitosis is a method of cell division in which a cell divides and produces identical copies of itself.
(Image: © Giovanni Cancemi | Shutterstock)

The primary mechanism by which organisms generate new cells is through cell division. During this process, a single "parent" cell will divide and produce identical "daughter" cells. In this way, the parent cell passes on its genetic material to each of its daughter cells. First, however, the cells must duplicate their DNA. Mitosis is the process by which a cell segregates its duplicated DNA, ultimately dividing its nucleus into two.

Cell division is a universal process among living organisms. In 1855, Rudolf Virchow, a German researcher, made a fundamental observation about all living creatures: every cell originates from another cell, or "omnis cellula e cellula," in the original Latin, as author Myron Shultz recounts in a 2008 article in the journal Emerging Infectious Diseases.

The mechanisms of cell division vary between prokaryotes and eukaryotes. Prokaryotes are single-celled organisms, such as bacteria and archaea. They have a simple internal structure with free-floating DNA. They use cell division as a method of asexual reproduction, in which the genetic makeup of the parent and resulting offspring are the same. One common mechanism of asexual reproduction in prokaryotes is binary fission. During this process, the parent cell duplicates its DNA and increases the volume of its cell contents. Eventually, a fissure emerges in the center of the cell, leading to the formation of two identical daughter cells.

The cells of eukaryotes, on the other hand, have an organized central compartment, called the nucleus, and other structures, such as mitochondria and chloroplasts. Most eukaryotic cells divide and produce identical copies of themselves by increasing their cell volume and duplicating their DNA through a series of defined phases known as the cell cycle. Since their DNA is contained within the nucleus, they undergo nuclear division as well. "Mitosis is defined as the division of a eukaryotic nucleus," said M. Andrew Hoyt, a professor of biology at Johns Hopkins University, "[though] many people use it to reflect the whole cell cycle that is used for cell duplication."

Like prokaryotes, single-celled eukaryotes, such as amoeba and yeast, also use cell division as a method of asexual reproduction. For complex multicellular eukaryotes like plants and animals, cell division is necessary for growth and the repair of damaged tissues. Eukaryotic cells can also undergo a specialized form of cell division called meiosis, which is necessary to produce reproductive cells like sperm cells, egg cells and spores.

Stages of the eukaryotic cell cycle

The eukaryotic cell cycle is a series of well-defined and carefully timed events that allow a cell to grow and divide. According to Geoffery Cooper, author of "The Cell: A Molecular Approach, 2nd Ed." (Sinauer Associates, 2000) most eukaryotic cell cycles have four stages:

G1 phase (first gap phase): During this phase cells that are intended for mitosis, grow and carry out various metabolic activities.

S phase (synthesis phase): During this phase, the cell duplicates its DNA. Eukaryotic DNA is coiled around spherical histone proteins to create a rod-shaped structure called the chromosome. During the S phase, each chromosome generates its copy, or sister chromatid. The two sister chromatids fuse together at a point called the centromere, and the complex resembles the shape of the letter "X."

G2 phase (second gap phase): During this phase the cell continues to grow and generate proteins necessary for mitosis.

(G1, S and G2 phases are collectively referred to as "interphase.")

M phase (mitosis): Mitosis involves the segregation of the sister chromatids. A structure of protein filaments called the mitotic spindle hooks on to the centromere and begins to contract. This pulls the sister chromatids apart, slowly moving them to opposite poles of the cell. By the end of mitosis each pole of the cell has a complete set of chromosomes. The nuclear membrane reforms, and the cell divides in half, creating two identical daughter cells.

Chromosomes, become highly compacted during mitosis, and can be clearly seen as dense structures under the microscope.

The resulting daughter cells can re-enter G1 phase only if they are destined to divide. Not all cells need to divide continuously. For example, human nerve cells stop dividing in adults. The cells of internal organs like the liver and kidney divide only when needed: to replace dead or injured cells. Such types of cells enter the G0 phase (quiescent phase). They remain metabolically active and only move into the G1 phase of the cell cycle when they receive the necessary molecular signals, according to Cooper.

Mitosis is divided into four stages, according to course materials from the University of Illinois at Chicago. The characteristic stages are also seen in the second half of meiosis.

Prophase: The duplicated chromosomes are compacted and can be easily visualized as sister chromatids. The mitotic spindle, a network of protein filaments, emerges from structures called centrioles, positioned at either end of the cell. The mitotic spindle is flexible and is made of microtubules, which are in turn made of the protein subunit, tubulin.

Metaphase: The nuclear membrane dissolves and the mitotic spindle latches on to the sister chromatids at the centromere. The mitotic spindle can now move the chromosomes around in the cell. "You can make an analogy to a girder that's holding up a skyscraper," said Hoyt. "Except the girder can assemble and disassemble very rapidly. They are structural elements that are extremely dynamic." By the end of metaphase, all the chromosomes are aligned in the middle of the cell.

Anaphase: The mitotic spindle contracts and pulls the sister chromatids apart. They begin to move to opposite ends of the cell.

Telophase: The chromosomes reach either end of the cell. The nuclear membrane forms again and the cell body splits into two (cytokinesis).

At the end of mitosis, one cell produces two genetically identical daughter cells.

The various events of the cell cycle are tightly regulated. If errors occur at any one stage, the cell can stop cell division from progressing. Such regulatory mechanisms are known as cell cycle checkpoints, according to Cooper. There are three checkpoints within the G1, G2 and M phases. Damaged DNA stops cell cycle progression in the G1 phase, ensuring that an aberrant cell will not be replicated. The G2 checkpoint responds to incorrectly duplicated, or damaged DNA. It prevents cells from moving into the M phase until the DNA is replicated correctly, or until the damage is repaired. The M phase checkpoint can halt the cell cycle in metaphase. It ensures that all the sister chromatids are properly hooked up to the mitotic spindle and that sister chromatids move towards opposite ends of the cell.

"If things go wrong and are not corrected, you end up with some cells that get extra chromosomes and some that are deficient," Hoyt said. "Often those cells have a genotype[DNA sequence] that won't support the life of the cell, and the will cell die. That's usually a good thing."

Sometimes, abnormal cells manage not only to survive, but also to proliferate. Most often, these cells are implicated in cancer. "It [the cell] may have an extra copy of a chromosome that has an oncogene on it. And that's going to start pushing the cell cycle forward when it shouldn't be going forward," Hoyt said. "That's a first step toward cancer progression." Cancerous cells are known to go through rampant and unregulated cell divisions.

The relationship between the cell cycle and cancer has led to the development of a class of cancer drugs that specifically target cancer cells during mitosis. According to anarticle published in 2012 in the journal Cell Death & Disease, "this strategy encompasses a prolonged arrest of cells in mitosis, culminating in mitotic cell death."

For example, microtubule poisons stop mitosis by targetingmicrotubules, the main component of the mitotic spindle. Damaging these thin, hollow, microscopic protein filaments ultimately prevents sister chromatids from being pulled apart. Examples of microtubule poisons are the medications paclitaxel (Taxol) and vinca alkaloids, which are used to treat a range of cancers, including certain ovarian and breast cancers.

However, microtubule poisons are not without their limitations. According to a 2018 review article published in the journal EMBO Reports, these drugs can sometimes be toxic to brain cells, or cancer cells can become drug-resistant and avoid being killed. In an effort to find alternate solutions, researchers are looking to develop drugs that target other aspects of mitosis. In 2016, the Food and Drug Administration (FDA) approved the use of the new drug Palbociclib in combination with existing anti-cancer drugs to treat certain breast cancers. Palbociclib works by keeping cancer cells frozen in the G1 phase, according to a 2017 review article published in the journal Nature Reviews Cancer.

The compounds tested in clinical trials so far have had some success but have not been as effective as microtubule poisons, according to EMBO Reports. Nevertheless, targeting mitosis in the treatment of cancer remains an active area of research.