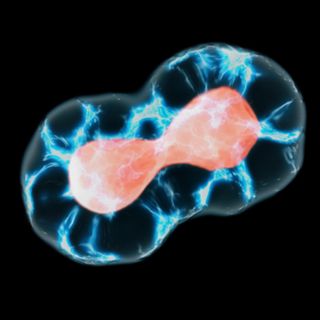 Cells separating at the end of meiosis.
(Image: © Shutterstock)

All cells arise from other cells through the process of cell division. Meiosis is a specialized form of cell division that produces reproductive cells, such as plant and fungal spores and sperm and egg cells.

In general, this process involves a "parent" cell splitting into two or more "daughter" cells. In this way, the parent cell can pass on its genetic material from generation to generation.

Eukaryotic cells and their chromosomes

Based on the relative complexity of their cells, all living organisms are broadly classified as either prokaryotes or eukaryotes. Prokaryotes, such as bacteria, consist of a single cell with a simple internal structure. Their DNA floats freely within the cell in a twisted, thread-like mass called the nucleoid.

Animals, plants and fungi are all eukaryotes. Eukaryotic cells have specialized components called organelles, such as mitochondria, chloroplasts and the endoplasmic reticulum. Each of these performs a specific function. Unlike prokaryotes, eukaryotic DNA is packed within a central compartment called the nucleus.

Within the eukaryotic nucleus, long double-helical strands of DNA are wrapped tightly around proteins called histones. This forms a rod-like structure called the chromosome.

Cells in the human body have 23 pairs of chromosomes, or 46 in total. This includes two sex chromosomes: two X chromosomes for females and one X and one Y chromosome for males. Because each chromosome has a pair, these cells are called "diploid" cells.

On the other hand, human sperm and egg cells have only 23 chromosomes, or half the chromosomes of a diploid cell. Thus, they are called "haploid" cells.

When the sperm and egg combine during fertilization, the total chromosome number is restored. That's because sexually reproducing organisms receive a set of chromosomes from each parent: a maternal and paternal set. Each chromosome has a corresponding pair, orhomolog.

Eukaryotes are capable of two types of cell division: mitosis and meiosis

Mitosis allows for cells to produce identical copies of themselves, which means the genetic material is duplicated from parent to daughter cells. Mitosis produces two daughter cells from one parent cell.

Meiosis, on the other hand, is a specialized form of cell division that occurs in organisms that reproduce sexually. As mentioned above, it produces reproductive cells, such as sperm cells, egg cells, and spores in plants and fungi.

In humans, special cells called germ cells undergo meiosis and ultimately give rise to sperm or eggs. Germ cells contain a complete set of 46 chromosomes (23 maternal chromosomes and 23 paternal chromosomes). By the end of meiosis, the resulting reproductive cells, or gametes, each have 23 genetically unique chromosomes.

The overall process of meiosis produces four daughter cells from one single parent cell. Each daughter cell is haploid, because it has half the number of chromosomes as the original parent cell.

A closer look at meiosis

Before meiosis begins, some important changes take place within the parent cells. First, each chromosome creates a copy of itself. These duplicated chromosomes are known as sister chromatids. They are fused together and the point where they are joined is known as the centromere. Fused sister chromatids roughly resemble the shape of the letter "X."

Meiosis occurs over the course of two rounds of nuclear divisions, called meiosis I and meiosis II, according to Nature Education's Scitable. Furthermore, meiosis I and II are each divided into four major stages: prophase, metaphase, anaphase and telophase.

Meiosis I is responsible for creating genetically unique chromosomes. Sister chromatids pair up with their homologs and exchange genetic material with one another. At the end of this division, one parent cell produces two daughter cells, each carrying one set of sister chromatids.

Meiosis II closely resembles mitosis. The two daughter cells move into this phase without any further chromosome duplication. The sister chromatids are pulled apart during this division. A total of four haploid daughter cells are produced during the course of meiosis II.

The four stages of meiosis Iare as follows, according to "Molecular Biology of the Cell." (Garland Science, 2002):

Prophase I: At this stage, chromosomes become compact, dense structures and are easily visible under the microscope. The homologous chromosomes pair together. The two sets of sister chromatids resemble two X's lined up next to each other. Each set exchanges bits of DNA with the other and recombines, thus creating genetic variation. This process is known as crossing over, or recombination.

Even though in humans the male sex chromosomes (X and Y) are not exact homologs, they can still pair together and exchange DNA. Crossing over occurs within only a small region of the two chromosomes.

By the end of prophase I, the nuclear membrane breaks down.

Metaphase I: The meiotic spindle, a network of protein filaments, emerges from two structures called the centrioles, positioned at either end of the cell. The meiotic spindle latches onto the fused sister chromatids. By the end of metaphase I, all the fused sister chromatids are tethered at their centromeres and line up in the middle of the cell. The homologs still look like two X's sitting close together.

Anaphase I: The spindle fibers start to contract, pulling the fused sister chromatids with them. Each X-shaped complex moves away from the other, toward opposite ends of the cell.

Telophase I: The fused sister chromatids reach either end of the cell, and the cell body splits into two.

Meiosis I results in two daughter cells, each of which contains a set of fused sister chromatids. The genetic makeup of each daughter cell is distinct because of the DNA exchange between homologs during the crossing-over process.

In other words, by the end of the process, the chromosome number is unchanged between the cells that enter meiosis II and the resulting daughter cells.

The four stages of meiosis II are as follows, according to “Molecular Biology of the Cell, 4th edition.”

Metaphase II: The meiotic spindles latch onto the centromere of the sister chromatids, and they all line up at the center of the cell.

Anaphase II: The spindle fibers start to contract and pull the sister chromatids apart. Each individual chromosome now begins to moves to either end of the cell.

Telophase II: The chromosomes reach opposite ends of the cell. The nuclear membrane forms again, and the cell body splits into two

Meiosis II results in four haploid daughter cells, each with the same number of chromosomes. However, each chromosome is unique and contains a mix of genetic information from the maternal and paternal chromosomes in the original parent cell.

Why is meiosis important?

Proper “chromosomal segregation,” or the separation of sister chromatids during meiosis I and II is essential for generating healthy sperm and egg cells, and by extension, healthy embryos. If chromosomes fail to segregate completely, it's called nondisjunction and can result in the formation of gametes that have missing or extra chromosomes, according to "Molecular Biology of the Cell, 4th edition."

When gametes with abnormal chromosome numbers fertilize, most of the resulting embryos don't survive. However, not all chromosomal abnormalities are fatal to the embryo. For example, Down syndrome occurs as a result of having an extra copy of chromosome 21. And, people with Klinefelter syndrome are genetically male but have an extra X chromosome.

The most significant impact of meiosis is that it generates genetic diversity, and that's a major advantage for species survival.

"Shuffling the genetic information allows you to find new combinations which will perhaps be more fit in the real world," Hoyt said.