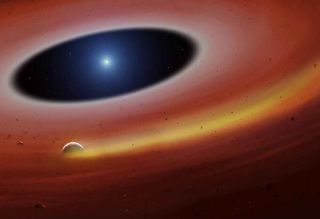 In 2019 astronomers discovered the obliterated core of a heavy metal planet rotting around a dead star because nature is BRUTAL.
(Image: © University of Warwick/Mark Garlick)

If a bunch of exploding stars hadn't forged the universe's heaviest elements billions of years ago, there would be no iron for our Maidens, no lead in our Zeppelins and no rocks to roll all nite.

This is to say, nature has never needed humans in order to be totally metal — and 2019 was no exception. This year was so metal that cockatoos taught themselves to headbang, cows rode hurricanes across the sea and black holes got so heavy that they defied physics.

In humble appreciation of these epic stories and others, we offer the following collection of 10 times nature was totally metal in 2019.

A walrus is a saber-toothed torpedo wrapped in 2,000 lbs. (900 kilograms) of rippling blubber. You probably don't spend much time thinking about how brutal these arctic sea units are — unless you've had the misfortune of getting too close to one or her calves.

That was the case for a group of Russian marine scientists in September, when they landed on a remote island in the Russian Arctic during a research expedition. According to a report from the Russian Geological Society, the team piloted its landing craft a bit too close to a mother walrus and her babies, prompting mama to attack the vessel — and wreck it. "The boat sank," the report said, though, luckily, "all the landing participants safely reached the shore."

The mother walrus and her family were also unharmed. When was the last time you headbanged a boat to death and walked away unscathed?

Rudolph the red-nosed reindeer didn't go down in history for his combat prowess. Clunky and herbivorous, reindeer are much better at running away from predators than they are at fighting them. Spook enough reindeer at once, however, and their mad dash for safety could transform into an unstoppable force of nature.

In February, a PBS documentary called "Wild Way of the Vikings" showed what it looks like when this happens. It's called a "reindeer cyclone." When threatened (say, by a wolf's fangs or a hunter's arrow), a herd of reindeer may stampede over the ground in a spiral shape that makes it impossible for a predator to target any individual member of the herd. These cyclones once confounded Viking hunters in Norway, the documentary explains. But now, thanks to some stunning drone footage, we modern gatherers can marvel at the awesomeness of this furry mosh pit while chewing on beef jerky from the safety of our homes.

Lurking within sea sponges up to 550 feet (167 meters) deep off the coast of Japan, the paper clip-size worms called Leocratides kimuraorum are nearly transparent and exceptionally quiet — until it's time to rock out. When two worms engage in what researchers describe as a "mouth fight," they charge each other mouth-first, expand their throat muscles to create a high-tension bubble and then butt heads until those bubbles burst in an ear-splitting "pop." In a July 8 study, researchers found that each pop can reach up to 157 decibels in water, making these headbanging brawls some of the noisiest animal interactions in the sea (not bad for a bottom feeder).

"Grasshopper blizzard" sounds like a rough-draft name for one of the 10 plagues that was cut from the Old Testament before printing. But the people of Las Vegas got to experience such an event firsthand this summer when tens of thousands of migrating bugs swarmed the city several nights in a row.

Following a rainy spring that filled the Mojave Desert with lots of tasty vegetation, swarms of well-fed desert grasshoppers collectively flew northward this July as part of their regular seasonal migration. This year, their path took them directly over Las Vegas. Perhaps enticed by the bright lights or promise of free drinks, tens of thousands of the bugs alighted on the Strip, blanketing the sidewalks and seething around streetlights like living snow flurries.

So dense was the swarm that meteorologists mistook it for a storm when the cloud of insects appeared on weather radars on July 27. A few weeks later, the harmless bugs were gone, leaving, as so many Vegas visitors do, with nothing.

Galaxies cannibalize each other all the time. The Milky Way eats other galaxies; our neighboring Andromeda galaxy does it. And when the two inevitably crash into each other about 4 billion years from now, they will do it to each other. Justice is sweet (and apparently tastes like stars).

Astronomers aren't sure exactly what will happen when our galaxy smashes into Andromeda, but it will probably be messy. Once-dormant black holes could spark to life, stars will ricochet quadrillions of miles out of orbit, and crackling cosmic radiation will stain the sky in every direction. For a picture of what this could look like, take a gander at the ongoing galactic pileup known as NGC 6052. As shown in an epic photo snapped by the Hubble Space Telescope in March, two large galaxies in the Hercules constellation (about 230 million light-years away from Earth) smash into each other like a buzz saw biting through wood.

Studying this cosmic carnage could help astronomers find some clues about the crash that awaits the Milky Way. Or it could just be a nice reminder that life is futile and meaningless. Either way!

In cannibal news closer to home, a bunch of ants fell into a nuclear fallout shelter in Poland and have been eating each other to survive for years.

That's what scientists discovered when they found a colony of roughly 1 million wood ants trapped in a bunker near the German-Polish border in 2015. The ants were once part of a larger colony living over a 1960s-era nuclear base, but they had apparently fallen through a ventilation pipe that ended in a long drop to the bunker floor. Escape was impossible and food nonexistent; to survive, the unlucky castaways must have taken to eating each other's corpses, the team reported in an appropriately spooky Oct. 31 study. Indeed, in an analysis of 150 corpses from the room, 93% showed signs of being eaten. (Metal.)

Cannibalism isn't new to wood ants; the species is known to feed its young with the corpses of fallen enemies racked up during ant turf wars, the researchers noted. On a second trip to the bunker, the team installed a wooden board connecting the bunker's floor to the ceiling pipe. Most of the ants escaped within the year, free at last to cannibalize their enemies instead of their comrades, as nature intended.

Besides having a totally awesome name, the deep-sea dragonfish (genus Aristostomias) has one of the most metal jaws in nature. The eel-like predator's jaw can yawn open at 120-degree angles, allowing a dragonfish to devour prey more than half its size. (Imagine a toddler swallowing a newborn. Yikes.) You might think the sight of chompers like these would be enough to send sea critters running in fright, but the dragonfish's fangs are virtually invisible, not even reflecting the light from the fish's own bioluminescent body.

How is this feat of carnivorous camouflage possible? A study published in June looked at dragonfish fangs under an electron microscope, finding an array of grain-size nanocrystals speckled across each tooth's enamel that prevent light from scattering. The same trick could inspire human-size cloaking devices, the researchers wrote, allowing devious Muggles to skulk around like it's lights out at Hogwarts, hiding in plain sight.

Take these baby fish, who perished in a perfectly preserved school when an underwater avalanche crushed them 50 million years ago. Or take this spiky worm, whose final commute across the muddy seafloor was immortalized in what scientists call the earliest "death march" in the fossil record, dating to roughly 550 million years ago. That dead millipede got scientists particularly excited in September, because it proved that animals have been mobile since at least the Ediacaran period (635 million to 539 million years ago), even earlier than was previously estimated. So long, ancient corpse worm. We salute you.

In case you've forgotten, Earth's sun is a constantly exploding ball of awesome. It's home to towering fountains of plasma; "lava lamp blobs" of mystery matter 500 times larger than Earth; and a writhing magnetic field that twists, turns, snaps and lashes out into space every 11 years or so, seriously screwing with Earth's power grid. In July, scientists added new phenomena to that list, these known as "terminator events." They're basically cataclysmic magnetic field collisions at the sun's equator.

Besides having a 1,000% epic name, these "terminator" collisions may result in twin tsunamis of plasma tearing across the star's surface in both directions, according to a February 2019 study. Yes, that means tsunamis of plasma, on the sun, moving at 1,000 feet (300 m) per second for weeks at a time. There is nothing not metal about this … save for the fact that, at the moment, the tsunamis are only theoretical. (The researchers who described them were looking at magnetic field patterns and data models, not physical observations.) Nevertheless, we challenge scientists to be bold and give the next version of the Parker Solar Probe a surfboard … and maybe some speakers for blasting Dick Dale.

Finally, we end on the most literally metal story of the year. In April, astronomers discovered the shattered remains of a dead planet orbiting a dead sun in a desolate solar system 400 million light-years away from Earth. The expired planet's broken heart is made of actual heavy metal, and this world orbits at breakneck speed through a dirty cosmic boneyard full of other chunks of dead planets.

How did these worlds die? Their own star probably engulfed them in flames as it ballooned outward during the final phases of its life, then devoured any leftovers after collapsing into a white dwarf (the superdense, gravitationally intense husk of a dead star). The remaining planetary chunk that makes up the newfound, dead world may have survived only by the strength of its heavy metal core, which now flies around the dead star like a missile, completing an orbit every 2 hours.

Mourn the dead planet and its dead star if you like, but do not pity them; one day, astronomers say, after our sun runs out of fuel and inevitably collapses, our solar system will probably look much the same.