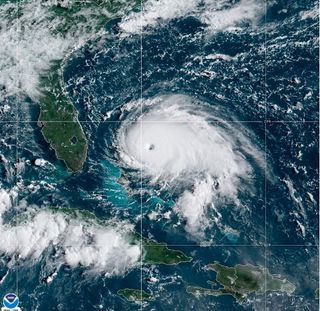 Hurricane Dorian is now tied for the second-strongest hurricane ever recorded, according to a National Hurricane Center meteorologist. Packing sustained winds of up to 185 mph (295 km/h), Dorian is slamming the Bahamas, its 10-mile-wide eye trained on Grand Bahama tonight (Sept. 1).

After that, the powerful tropical cyclone is expected to head northwest, though forecasters say its path is a tricky one. The hard-to-pin-down track is primarily due to an atmospheric steering wheel, which Dorian lost along its rise to Category 5.

"When they get into these weak flow patterns, where there's not much to steer them, we can have these erratic tracks. It's not common, but it's not unprecedented," Lance Wood, a meteorologist at the National Weather Service, told Live Science, mentioning the difficulty in predicting the path of Hurricane Harvey, which made two landfalls in Texas and one in Louisiana in August 2017.

Hurricanes are usually steered by the wind patterns in the middle part of the atmosphere, he explained. "In this particular case, Dorian had a pretty good north-northwest movement in the 10 to 12 mile-per-hour range, but it was being [primarily] steered by being south of a high-pressure area in the Atlantic and that began to weaken on the west side. And the winds weakened, so it's not going to have a lot to steer it. So it's moving really slow."

The key question: Where will Dorian be when another system, this one a tropical low-pressure system, develops along the East Coast? Right now, this system is north of Dorian, moving in the middle part of the atmosphere from the Great Lakes region. "It will be positioned along the East Coast late Monday and Tuesday, causing Dorian to accelerate to the north," Wood explained.

Hurricane Dorian is crawling west at a mere 7 mph (11 km/h), according to the National Hurricane Center's 5 p.m. update. Forecasters expect this sluggish forward movement to continue for the next 24 to 30 or so hours, before Dorian is expected to get a bump from the low-pressure system.

"We think it will stay offshore of Florida and probably offshore of Georgia," Wood said, adding that the storm should begin to accelerate north after it's passed by Florida.

If Dorian does make landfall, Wood says he expects that would happen along the Outer Banks of North Carolina. But he calls this almost too close to call — a slight move to the east or west could make all the difference.

The National Hurricane Center says Dorian will remain a "catastrophic hurricane" over the next few days, with hurricane-force winds now extending out 45 miles (75 km) from its center.

As of 5 p.m., the NHC was predicting life-threatening storm surge on the Abaco Islands and Grand Bahama Island, where water levels could rise by as much as 18 to 23 feet (5.5 to 7 meters) above normal tide levels. Along the coast, that surge is expected to be accompanied by huge waves, the NHC said.

Storm surges could send water levels to heights of 4 to 7 feet (1.2 to 2 m) in Florida from Jupiter Inlet to the Volusia/Brevard county line. Areas north of Deerfield Beach extending down to Jupiter Inlet could see waters rise 2 to 4 feet (0.6 to 1.2 m) above ground level, the NHC said.