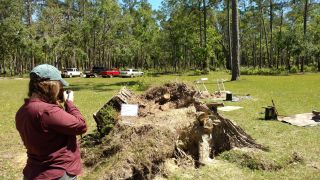 Hurricane Michael, a category 5 storm, hit Florida last October with vengeance. It uprooted around a hundred trees at Fort Gadsden. But by doing so, it also exposed artifacts tangled up in their giant rootballs. The artifacts date back to the early 19th century, when the British fort was occupied by maroons, a community of freed slaves. Here, Andrea Repp, Forest Service archaeologist, measures the holes created by the uprooting of large pine trees in the area. [Read more about the discovery]

A crew member excavates the soil from an upturned tree, adjacent to the British Fort citadel. The team is analyzing the rootballs for artifacts that were buried beneath the soil throughout the last couple hundred years.

A rootball after some areas of the soil were removed and screened for artifacts.

A crew member dumps excavated soil onto screens, that archaeologists and volunteers use to sift through and recover artifacts.

The team discovered many artifacts in the upturned rootballs, including ammunition and ceramics. Here, the storm exposed a whiteware ceramic sherd.

The giant rootballs revealed pieces of ceramics, such as this earthenware sherd, left over from the diverse cultures that lived together at the fort.