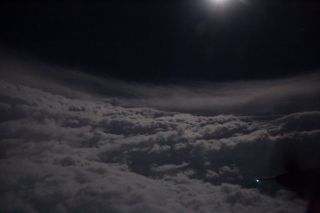 During storms as strong as Hurricane Irma — which experts are calling the most powerful hurricane to form in the Caribbean in recorded history — most people would instinctually stock up on supplies and hunker down, or retreat as far from the storm as possible.

But for a handful of people, the formation of a hurricane is a call to fly directly into the eye of the storm, to perform observations that help scientists track powerful weather events.

Recently, the U.S. Air Force’s Hurricane Hunters team flew an aircraft from St. Croix in the U.S. Virgin Islands into the center of Hurricane Irma, on a data-collecting mission for the National Hurricane Center. At the same time, the group also captured astonishing views of the storm's eye — from the inside. [Hurricane Irma: Everything You Need to Know About This Monster Storm]

A striking photo shared by the Hurricane Hunters today (Sept. 6) on Twitter shows the bowl-like curve of clouds in Irma's eye at night, with the nearly full moon visible at the  top of the image. The scene is oddly peaceful, standing in stark contrast to images that show the devastating power of a Category 5 hurricane, with wind speeds measuring 157 miles per hour (253 km/h) or more.

Another image, posted to Twitter yesterday (Sept. 5), offers a daytime perspective from inside Irma's eye that features the so-called "stadium effect," in which the wall of clouds in a hurricane's eye are so well-defined that they resemble a wall of seats rising upward in a football stadium, as seen from the field below.

Two pilots and a navigator guide the aircraft — a WC-130J Super Hercules — which flies at an altitude of around 10,000 feet (3,048 meters), Staff Sergeant Heather Heiney, a public affairs specialist with the Air Force's 403rd Wing, told Live Science. The 403rd Wing is the unit in the U.S. Department of Defense that organizes, oversees and performs all missions related to hurricane reconnaissance, according to the unit's website.

Meanwhile, the flight's payload — a data-gathering device called a dropsonde — is deployed by a load master and an aerial reconnaissance weather officer, to collect meteorological data such as the storm's air pressure and wind speed, Heiney explained.

Only 12 aircraft in the world are capable of flying into thunderstorm environments to sample data, and 10 of those aircraft are in use by the Air Force's Hurricane Hunters. Their flights typically last about 8 to 12 hours — depending on how far away the hurricane is — and once they reach the storm, the team will make several passes through the eye, Heiney said.

Though the eye of a storm may appear calm, flying through a hurricane — particularly one as powerful as Irma — always comes with risks. Flights are frequently struck by lightning, which generally pass harmlessly through the aircraft, Heiney said. The biggest danger to the Hurricane Hunters when flying within a storm is from tornadoes, she added.

"But they are all very well trained, so they know what to look for and what to avoid to stay safe throughout the flight," Heiney told Live Science.