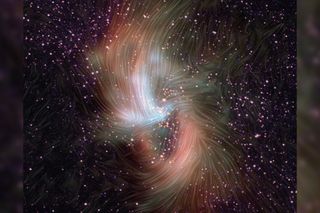 The monster black hole at the center of the Milky Way is eerily quiet, and now astronomers think they know why.

There are invisible magnetic field lines wrapped around it — researchers already suspected this. But new images show that those unseen lines form a structure that extends light-years across space and might be powerful enough to stop material from falling into the black hole. And if giant magnetic fields are knocking material into an orbit that's out of the black hole's grasp, that could explain why it mostly slumbers. In fact, it's so dim that a magnetar can outshine it in the sky.

"The spiral shape of the magnetic field channels the gas into an orbit around the black hole," C. Darren Dowell, a scientist at NASA's Jet Propulsion Laboratory and lead author of the study, said in a NASA statement. "This could explain why our black hole is quiet while others are active." [9 Weird Facts About Black Holes]

To map the magnetic field lines, a team of researchers pointed a NASA infrared telescope called SOFIA — mounted on the back of a Boeing 747 aircraft — at Sagittarius A*. They haven't formally published their results yet, but the researchers presented their findings at the June meeting of the American Astronomical Society and described them in the NASA statement. SOFIA couldn't see the invisible lines, of course, but it could see the dust particles floating through those lines. And the magnetic field structure caused all the particles to point in one direction. Those aligned particles, in turn, polarized the infrared light passing through the dust — in much the same way sunglasses can polarize light passing through them — allowing researchers to figure out where the lines were and in what direction they were pointing.

Astronomers not involved in the research said the measurement of the magnetic field lines was exciting, but were skeptical that those lines fully accounted for the black hole's quiet state. (Each one also each noted that it's difficult to fully evaluate the work before the paper is published.)

Erin Bonning, an astrophysicist and black hole researcher at Emory University who was not involved in the SOFIA work, pointed out that the image of the magnetic field lines is about 10 light-years across, where 1 light-year is equal to about 5.9 trillion miles (9.5 trillion kilometers). That's much wider than Sagittarius A* — an object that would fit within our solar system — and so is too large to capture details in the immediate vicinity of the black hole. That smaller, closer region, she said, is where you'd expect the most important events knocking material into a black hole — or keeping the material at bay — to take place.

"The press release seems to suggest that the magnetic field is channeling the material into an orbit that 'misses' the black hole. This would be a plausible explanation for the lack of strong accretion onto Sgr A*," Bonning wrote in an email to Live Science.

However, she pointed out, you wouldn't necessarily expect material to fall into a black hole even without the magnetic field. Most supermassive black holes don't manage to absorb that much material — perhaps because much of it piles up in the accretion disk orbiting the dark cosmic beast — and stay pretty quiet.

"You can think of it this way: As massive as Sgr A* is, it is a physically *tiny* target on astronomical scales. To get matter to fall into the vicinity of the event horizon, it has to be moving more or less directly toward it," Bonning said.

That happens most often in galaxies that have recently undergone violent mergers, she said. But the Milky Way hasn't undergone such a recent merger.

"If you have structured magnetic fields light-years away from the black hole strong enough to direct the motion of the gas, it may be that this is an additional mechanism preventing matter infall into galactic centers," Bonning said.

But that doesn't mean the magnetic field is the main mechanism keeping the black hole quiet.

Misty Bentz, an astrophysicist at Georgia State University who also was not involved in the research, pointed out that even if magnetic fields are playing an important role in keeping Sagittarius A* quiet, that doesn't mean similar forces are at work around quiet supermassive black holes in other galaxies.

"Our galaxy is a bit special because our location inside of it means that we can study many properties and regions in great detail," she said. "Other galaxies, however, are generally too distant to achieve the same level of resolution and detail, especially when we are talking about the crowded environments in their galactic centers."

And what's true in the Milky Way might not be true elsewhere.

"There could be a variety of different reasons why other black holes are not feeding, including shock waves and winds from supernova explosions that expel the gas from the galaxy center, or there could just be an overall absence of gas in the galaxy center," Bentz said.

Simeon Bird, an astrophysicist at the University of California, Riverside, who also was not involved in the research, told Live Science that "Magnetic fields can certainly help explain why some black holes are quiescent while others are active," but like Bentz pointed out, "all other supermassive black holes are much farther away, so it's not easy to measure magnetic fields around them."

Like Bentz, Bird is interested in other explanations for why black holes go quiet. [5 Reasons We May Live in a Multiverse]

"Another possibility that might help keep black holes quiescent is that during an active phase, the black hole heats the gas around it to the point where it is completely disrupted," he said. "If the black hole is very active, the energy from the black hole might be able to just remove the gas completely, knock it clean out of the galaxy."

And once that happens, that black hole would likely go quiet.

Still, despite some skepticism that the magnetic field lines could fully explain why Sagittarius A* is so quiet — or that other supermassive black holes are quiet for the same reason — Bonning, Bentz and Bird called the study important, saying that it offers astronomers new keys to unlocking the mysteries of supermassive black hole behaviors.

"Every discovery, like the role of magnetic fields around Sagittarius A*, helps to provide one piece of the puzzle, and with enough puzzle pieces, we can hope to understand the life cycles of galaxies and the black holes that they host," Bentz said.

Editor's note: Due to an error in the editing process, this article originally misstated the length of a light-year. It in fact takes light 1 year to travel 5.9 trillion miles (9.5 trillion kilometers) in a vacuum.