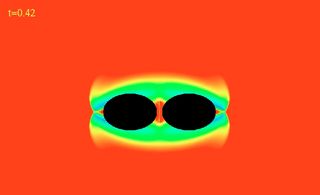 A snapshot from a video showing two particles being slammed into each other and distorting into pancake shapes before forming a black hole.
(Image: © Matt Choptuik, Will East, Frans Pretorius.)

If physicists do succeed in creating black holes with such energies on Earth, the achievement could prove the existence of extra dimensions in the universe, physicists noted.

Any such black holes would pose no risk to Earth, however, scientists added.

Black holes possess gravitational fields so powerful that nothing can escape, not even light. The holes normally form when the remains of a dead star collapse under their own gravity, squeezing their mass together.

A number of theories about the universe suggest the existence of extra dimensions of reality, each folded up into sizes ranging from as tiny as a proton to as big as a fraction of a millimeter. At distances comparable to the sizes of these extra dimensions, these models suggest gravity may become far stronger than normal. As such, atom smashers could cram enough energy together to generate black holes. [5 Reasons We May Live in a Multiverse]

When the most powerful particle accelerator in the world, the Large Hadron Collider, was coming online, scientists wondered if it might become a "black hole factory," generating a black hole as often as every second. Particles zip at high speeds around the 17-mile (27 kilometer) circular atom smasher before colliding into one another to create explosive energies. At its maximum, each particle beam the collider fires packs as much energy as a 400-ton train traveling at about 120 mph (195 km/h).

How to create a black hole

So far, researchers have detected no black holes at the Large Hadron Collider. Still, theoretical interest in this possibility remains alive. Now, using supercomputers, researchers simulating collisions among particles zipping near the speed of light have shown that black holes could form at lower energies than previously thought.

This new discovery is rooted in Einstein's theory of relativity. First, through his famous equation E = mc2, Einstein revealed that mass and energy are related. This means the greater the energy of a particle — say, the faster a particle gets accelerated in a collider — the greater its mass becomes.

Next, Einstein's theory explains that mass curves the fabric of space and time, generating the phenomenon known as gravity. As particles zip along within particle colliders, they warp space-timeand can focus energy much as glass lenses focus light.

When two particles collide, each one can focus the energy of the other. If scientists use models based on classical relativity that exclude notions of extra dimensions, "one might expect black hole formation at one-third the energy" than previously expected, researcher Frans Pretorius, a theoretical physicist at Princeton University, told LiveScience.

Still, conventional physics suggest it would take a quadrillion, or a million-billion, times more energy to form a microscopic black hole than the Large Hadron Collider is capable of, so even a third of that is beyond human reach. Scenarios based on extra dimensions could have black holes form at a lower energy, "but they make no concrete predictions on what it should be," Pretorius said.

As frightening as black holes might seem, if particle accelerators on Earth can generate them, such infinitesimal entities pose no risk to the planet.

"The one common misconception about the small black holes that may form at the Large Hadron Collider is that they would swallow the Earth," Pretorius said. "With about as much confidence as we can say anything in science, this is completely impossible."

To start with, theoretical physicist Stephen Hawking calculated all black holes should lose mass over time, giving it off as so-called Hawking radiation. Tiny black holes should shrink via such evaporation faster than they grow by gobbling up matter, dying within a fraction of a second, before they could engorge on any significant amount of matter.

Even if one assumes Hawking is wrong and that black holes are more stable than that, the tiny black holes would pose no danger. Because the microscopic black holes would be created within a particle accelerator, they should keep enough speed to escape from Earth's gravity. Moreover, if any get trapped, they are so tiny it would take each one more than the current age of the universe to destroy even a milligram of Earth matter.

"These black holes would be too small to consume any significant amount of matter," Pretorius said.