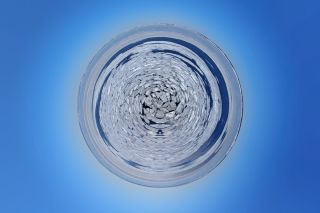 (Image: © nightman1965 via iStock/Getty Images Plus)

Twenty thousand years ago, life on Earth was a lot cooler. It was the tail end of a 100,000-year ice age — also called the Last Glacial Maximum — and massive sheets of ice covered much of North America, Northern Europe and Asia. (If they had been around at the time, New York City, Berlin and Beijing would all have been entombed in ice.)

Scientists are used to studying this chilly spell in Earth's history by looking at things like coral fossils and seafloor sediments, but now a team of seafaring researchers may have found a piece of the past that blows all the others out of the water: an actual sample of 20,000-year-old seawater, squeezed out of an ancient rock formation from the Indian Ocean.

According to the researchers, who described the find in a study to be published in the July 2019 issue of the journal Geochimica et Cosmochimica Acta, this find represents the first direct remnant of the ocean as it appeared during Earth's last ice age.

The researchers found their watery prize while drilling sediment core samples out of the underwater limestone deposits that make up the Maldives archipelago in South Asia. After hauling each core onto their research vessel, the team sliced up the rock like a tube of cookie dough and put the pieces into a hydraulic press that squeezed any remnant moisture out of the pores. [Photos: Traces of an Ancient Ice Stream]

When the researchers tested the composition of these fresh-pressed water samples aboard their ship, they were surprised to find that the water was extremely salty — far saltier than the Indian Ocean is today. They did more tests back on land to look at the specific elements and isotopes (versions of elements) that made up the water, and all the results seemed out of place in the modern ocean.

In fact, everything about these water samples indicated that they came from a time when the ocean was significantly saltier, colder and more chlorinated — exactly as it is thought to have been during the Last Glacial Maximum, when ice sheets sucked up ocean water and dropped sea levels to hundreds of feet below current levels.

"From all indications, it looks pretty clear we now have an actual piece of this 20,000-year-old ocean," lead study author Clara Blättler, an assistant professor of geophysical sciences at the University of Chicago, said in a statement.

If these results indeed hold water, the new samples provide the first direct look at how the ocean reacted to the geophysical swings of the last ice age. This understanding could lead to improved climate models to help understand our own changing world, Blättler said, as "any model you build of the climate has to be able to accurately predict the past."

Note: At the time of this article's publication, nobody had yet petitioned to drink the ancient ocean juice.