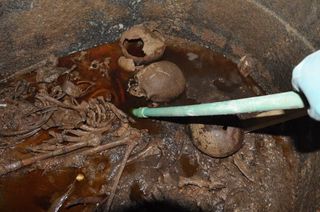 Three skeletons and liquid sewage were found inside the black sarcophagus from Alexandria, Egypt.
(Image: © Courtesy Egypt's Ministry of Antiquities. )

Welp, they did it: Yesterday (July 19), archaeologists in Egypt cracked open a mysterious, 2,000-year-old black sarcophagus — possibly the largest ever to be found in Alexandria — to see what was inside.

And while no evil curse seeped out of the tomb (at least, none that was immediately apparent), the findings — which consisted of three skeletons that may be the remains of soldiers lying in a pool of reddish sewage — still manage to spur some rumblings in the odder corners of the internet.

Case in point: A change.org petition, addressed to the "king of skeletons," begs for a taste of the bone juice. "We need to drink the red liquid from the cursed dark sarcophagus in the form of some sort of carbonated energy drink so we can assume its powers and finally die," the petition reads. [See Photos of Mummies Discovered at an Ancient Egyptian Cemetery]

So, Live Science had to ask: What would happen if you drank that awful, ominous red juice?

According to microbiologist Rolf Halden, a professor and director of the Center for Environmental Health Engineering at Arizona State University's Biodesign Institute, drinking the mystery juice is not a smart idea. Rather than acquiring powers from the dead, the drinker could be exposed to "something bad," he said.

It's not a good idea to drink sewage, no matter how old it is, Halden told Live Science.

That's because sewage — and debris from decaying bodies— contains a ton of microorganisms, and some of them are potentially dangerous. There are most likely viruses, bacteria and other pathogens in that liquid, including some bacteria that can form "endospores," which are extremely tough to kill, Halden said. Spores are known to survive in decaying specimens for thousands, and even millions, of years, he said.

Those are all good reasons for the red liquid not to be consumed as is, Halden said. However, "if anyone really needs to drink this [Editor's note: no one does], the material really needs to be sterilized," he said.

Halden added that, while there are indeed many reasons not to drink the juice, his lab would be happy to analyze a sample of it. He needs only a few milliliters of the liquid, he said.

As of Friday afternoon (July 20), the petition had nearly 1,500 signatures.