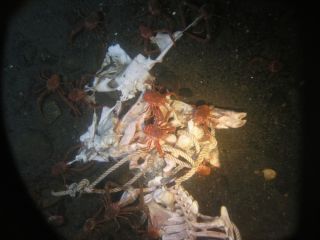 When a dead body decomposes in the ocean, scientists know little about what happens to it. To find out, some researchers performed an unusual experiment that involved dropping pig carcasses into the sea and watching them on video.

Lots of human bodies end up in the sea, whether due to accidents, suicides or from being intentionally dumped there, but nobody really knows what happens to them, said Gail Anderson, a forensic entomologist at Simon Fraser University in Canada who led the unusual study.

Anderson and her team got a chance to find out, using the Victoria Experimental Network Under the Sea (VENUS), an underwater laboratory that allows scientists to take video and other measurements via the Internet. With that equipment, all they needed was a body. [See Video of Ocean Scavengers Eating the Dead Pigs]

"Pigs are the best models for humans," Anderson told Live Science. They're roughly the right size for a human body; they have the same kind of gut bacteria, and they're relatively hairless, she said.

In the study, published Oct. 20 in the journal PLOS ONE, Anderson and her team used a remotely operated submarine to drop three pig carcasses into the Saanich Inlet, a body of salt water near Vancouver Island, British Columbia, at a depth of 330 feet (100 meters).

The researchers monitored what happened to the pig bodies using the live VENUS cameras, which they could control from anywhere with an Internet connection, and sensors that could measure oxygen levels, temperature, pressure, salinity and other factors. At the end of the study, the scientists collected the bones for further examination.

It didn't take long for scavengers to find the pigs. Shrimp, Dungeness crabs and squat lobsters all arrived and started munching on the bodies; a shark even came to feed on one of the pig corpses.Scavengers ate the first two bodies down to the bones within a month, but they took months to pick the third one clean.

The third body likely took so much longer due to the levels of oxygen in the water, the researchers found.

The Saanich Inlet is a low-oxygen environment, and has no oxygen during some times of the year, Anderson said. When the researchers dropped the first two pigs into the water, the oxygen levels were about the same, but when scientists dropped the third body in, the levels were lower.

The big scavengers (Dungeness crab and shrimp) need more oxygen to smaller creatures like the squat lobsters. But the smaller animals' mouths aren't strong enough to break the skin of the pigs. So as long as the carcass entered the water when oxygen conditions were tolerable, the larger animals would feed, opening the bodies up for smaller critters and the squat lobsters, Anderson said. But when oxygen was low, the larger animals didn't come, and the smaller animals couldn't feed.

"Now we have a very good idea of how bodies break down underwater," Anderson said. This kind of research helps solve mysteries such as the "floating feet" found wearing running shoes that have washed up along the West Coast in recent years. In fact, it's quite normal for ocean scavengers to gnaw off feet, and the running shoes simply make the body parts float, Anderson said.

Knowing how bodies degrade in the ocean can give rescue divers a sense of what to look for, as well as manage the expectations of family members of those lost at sea, Anderson said.