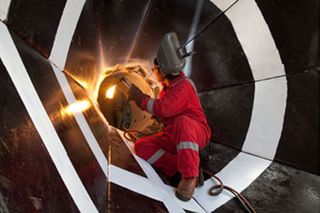 A welder works on a so called reentry cone used to guide drill pipe into the ocean floor.
(Image: © IODP)

Two new observatories have been installed beneath the ocean floor off of British Columbia, Canada, and will provide new insight into the creatures that dwell there.

"These observatories will measure directly, within the oceanic crust, key characteristics that govern an unseen, remote, yet geographically widespread biological world, and will support long-term chemical and biological sampling and environmental monitoring of this exotic habitat," said Jamie Allan, program director in the National Science Foundation's (NSF) Division of Ocean Sciences, which funds IODP.

The observatories, known as "CORKs" (because they are used to seal the drilled holes), were installed 125 miles (200 kilometers) west of Vancouver Island. Each CORK is packed with scientific instruments that collect samples and data at multiple depths to learn more about the water, pressures, temperatures, chemistry and microbiology within the rocks and sediments of the ocean crust .

The CORKs are being used as part of a sampling and monitoring network, which will enable scientists to determine the properties of the ocean crust, and better understand how water, heat and chemicals are transported beneath the seafloor.

During the expedition, researchers used the boreholes to conduct a few experiments. Tracers were injected into the ocean floor to track the directions, rates and patterns of water flow within the seafloor. The volume of salt water in the ocean crust is comparable to the volume of freshwater in Earth's ice caps and glaciers about 5-7 million cubic miles (20-30 million cubic km). For comparison, this is about 2,000 times greater than the global freshwater supply, and about a half million times greater than annual freshwater usage in the United States. This is the first time that scientists have been able to "tag" the water in the ocean's crust to track its flow.

Microbiologists also placed chips of rocks and minerals in the CORKs to identify microorganisms living in the seafloor a community that scientists think makes up a large fraction of life on Earth.

"It's like lowering an empty hotel into the borehole," said co-chief scientist Takeshi Tsuji of Kyoto University in Japan. "When the chips are recovered in a few years, we will learn who moved in."

Expedition co-chief scientist Andy Fisher of the University of California at Santa Cruz and fellow researchers will recover CORK samples and data and run additional experiments next summer and in later years.

"Through monitoring and experiments with CORKS, we will learn how microorganisms may have developed on Earth, which offers insight into how life may develop on other planets," said Fisher.