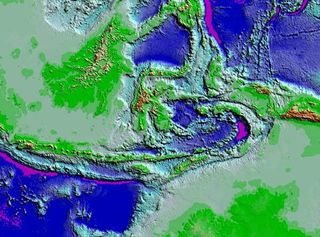 The Banda region and the 180 degree horseshoe-shaped curve of the arc is clearly visible, outlined by the relatively shallow troughs. The deeper blue and purple within the arc are young oceanic basins formed as the subducting slab rolled back.
(Image: © Wim Spakman, Robert Hall/Nature Geoscience)

Located smack in the middle of the spot where the India-Australia, Eurasia and Pacific tectonic plates are converging, the Banda Arc is a geological feature that has always puzzled scientists, who have never been able to explain how it came to be or how it has evolved over time.

Now a pair of researchers may have discovered the origin of this giant fold in Earth's crust .

"We have used two independent methods: plate tectonic reconstructions based on geology observed at the surface, and structure of subducted lithosphere observed in the mantle based on seismic tomography," said Robert Hall of the University of London, "and we believe this enables us to offer a new solution to this enigma which resolves many of the problems."

The Banda Arc is a roughly 600-mile- (1,000-kilometer-) long, 180-degree arc in eastern Indonesia. The arc is one of the largest folds in the Earth's crust, stretching to a depth of about 400 miles (650 kilometers). It is made up of young oceanic crust, enclosed by a volcanic inner arc, and outer arc islands.

This area has all the activity that a convergence zone between tectonic plates typically does, namely earthquakes and volcanoes, but scientists were never able to explain how it came to look like it does, or what exactly was causing the crust to deform in this peculiar pattern.

Hall and his colleague Wim Spakman of Utrecht University in the Netherlands say the deformation and the activity present in the surrounding are due to the rapid rollback of an oceanic slab.

A subducted chunk of crust within the mantle (the layer of superhot, flowing rock that underlies the crust ) is also causing part of the deformation, their study finds. Upon further investigation, the pair also realized that this piece was far more subducted than their initial reconstructions indicated. They suggest that this piece might be a slab that broke off from the lower portion of the Australian plate and disconnected from the continental crust.

This piece has become an obstruction for the Australian plate, causing it to fold instead of moving northward. The two sides of the fold are becoming steeper as they move closer together. The increasing incline of these two sides have caused the geologically rapid elevation of islands in the region.

For example, the islands of Timor and Seram have migrated from several kilometers below sea level to 3 km (nearly 2 miles) above it in the past few million years a rapid pace in geological time.

"It is an interesting commentary that despite the fact that we can see most of the geology at the surface although this is still a remote and difficult region for field geologists it has still been difficult for Earth scientists to work out what has happened," Hall said.

The study is detailed in the July 25 edition of the journal Nature Geoscience.