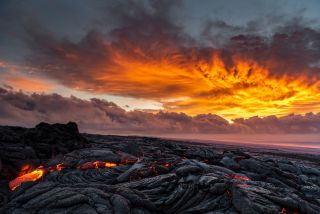 There are 18 volcanoes in the U.S. that pose a high threat to human life and livelihood, including Kilauea in Hawaii.
(Image: © Shutterstock)

While earthquakes and hurricanes often seem the most devastating types of natural disasters, volcanoes can have more wide-ranging effects than either.

As the Philippine's Mount Pinatubo showed in 1991, a volcano can create a cloud of sulfuric acid that encircles the entire planet.

Volcanoes form when chambers of magma, or hot molten rock, boil to the surface. These magma chambers often remain sealed for hundreds of years between eruptions, until the pressure builds sufficiently to break through a vent, which is a crack or weak spot in the rock above.

The blast creates a crater, where lava and ash spill out, forming the cone. On some volcanoes, the magma chamber collapses after a violent eruption and a caldera forms, which is just a large, bowl-shaped crater. (See Long Valley Caldera below.) Sometimes these calderas fill with water, as happened at Crater Lake in Oregon.

Earth's crust is made up of a dozen or so major plates, each moving about four inches a year. Rising magma pushes Earth's plates apart in the middle of the oceans. Here and along other weak spots in the plates, hot spots occur.

The Hawaiian Islands were created by a hot spot. When an oceanic plate slides under a continental plate, it creates a subduction zone. The rock is heated again as it dives into the Earth, and magma again rises to form volcanoes.

The volcanoes that tower above the surrounding mountains from California to Washington state are caused by subduction zones. This same process builds mountains and causes earthquakes.

Scientists have long theorized about giant chambers of pure magma deep within the Earth, which is eventually forced to the surface and reshapes the planet's crust. Instead, the magma seems to flow through a network of smaller vertical columns and interconnected chambers, according to the most recent research.

AD 79: One of the most famous volcanoes is Mount Vesuvius, which sits along the Bay of Naples in southern Italy. It has erupted more than 50 times in the past 2,000 years. It was the AD 79 eruption, which buried Pompeii, that Vesuvius is famous for, but another eruption in 1631 killed some 4,000 people.

1669: In Sicily, Mount Etna sent a river of lava through the streets of Catania, killing some 20,000 people there and in the surrounding region.

1783: The eruption of Mount Skaptar in Iceland devastated farming and fishing, causing a famine that killed a fifth of the country's people.

1815: Whirlwinds and tsunamis from the eruption of Mount Tambora, on Sumbawa Island in Indonesia, killed 12,000 people. The volcano sent a cloud ejecta into the atmosphere that was more than four times the amount ejected by Mount Pinatubo in 1991.

1883: Another Indonesian volcano, Krakatoa, erupted in an explosion heard 3,000 miles away. Seventy-pound boulders landed on islands 50 miles away, and a 130-foot tsunami devastated hundreds of villages, including Java and Sumatra. About 36,000 people died. Dust high in the atmosphere caused the Moon to appear blue, and sometimes green, for two years.

1980: Mount St. Helens in Washington state blew 1,300 feet off its top, killing 57 people and causing a midday darkness in towns 85 miles away. Though fresh in many peoples' minds, Mount St. Helens was relatively small by historical measures. The cloud of material it ejected was only about 5 percent of what Mount Pinatubo coughed up.

1991: After 600 years of dormancy, Mount Pinatubo in the Philippines rumbled for days before erupting and killing about 750 people, including several journalists who kept vigil in a restricted area waiting for the eruption. Ash was more than 6 feet deep in a two-mile radius around the volcano, and buried a U.S. air base 15 miles away.

Pinatubo's cloud of sulfuric acid, some 20 million tons of it, climbed to more than 12 miles in the stratosphere. Over the next several weeks, the cloud encircled the equator and spread to the poles, covering the entire planet. The particles reflected sunlight and cooled the Earth by nearly a full degree Fahrenheit.

Lassen Peak, California: Erupted between 1914 and 1917, causing no deaths. Lassen is considered one of the most likely in the Cascade range to erupt again.

Long Valley, California: The Long Valley Caldera is a 10 by 20-mile depression in the Sierra Nevada Mountains caused by an eruption 700,000 years ago. A tremendous explosion spit out molten rock from 4 miles under the surface; afterward, the whole mess settled more than a mile down into the depression where the magma had been.

Magma still feeds hot springs in the caldera. Earthquakes in 1980 marked the beginning of new activity that has included shifts in the position of hot springs and swarms of other small earthquakes. Geologists say it probably indicates that magma is again rising from below, and they suspect the area will erupt again.

Mount Shasta, California: Last known eruption was in 1786. Believed to erupt every 600 to 800 years. Mountain is significant as the incredibly dominant visual element in the Northern California landscape.

Kilauea and Muana Loa, Hawaii: Each tend to erupt every two or three years; eruptions are non-explosive, allowing these two volcanoes to be among the most studied active volcanoes in the world.