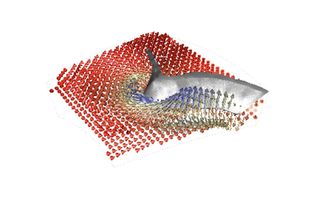 The scorching, molten rock inside the Earth — known as the Earth's mantle — oozes around faster than expected in certain spots, a new study suggests.

The Earth's surface is made of rocky plates floating on the mantle, which is solid but can flow under the enormous pressure and temperature of the deep Earth. At plate boundaries, the plates may rub alongside each other or one may dive under the other and sink into the mantle, creating what is called a subduction zone. As the plate sinks, it drags the mantle material along with it, said Magali Billen, associate professor of geology at the University of California, Davis.

Geologists previously thought that the mantle and a sinking plate moved at the same rate. But a new model used by Billen and her colleagues shows that this isn't the case.

Billen used the model to investigate the motion at the Alaskan subduction zone, the place where the Pacific tectonic plate is diving beneath Alaska and pushing up Mt. McKinley. Along this zone, the mantle flows 20 to 30 times faster than the sinking plate, the model found.

"Our model suggests that some parts of the mantle are moving at screaming speeds compared to what we can observe directly at the Earth's surface," Billen said. "There is much more mixing and more rapid transport of heat in these regions of the Earth than we suspected."

The model is the most detailed to date of the Pacific plate in a subduction zone and provides the first explanation of how the Earth's mantle can flow faster than a sinking plate.

Billen and graduate student Margarete Jadamec, now a postdoctoral researcher at Monash University in Australia, ran their model on the Teragrid supercomputer at the Texas Advanced Computing Center to create a much higher resolution model than was previously available. The model is the best model approximation of a plate sinking into the Earth, Billen told LiveScience.

The Pacific plate is pulled by a network of slabs — the leading edges of subducting plates — one of which forms the Alaskan subduction zone.

The Pacific plate is the largest tectonic plate on the Earth, covering roughly a third of the surface of the earth and sitting under most of the Pacific Ocean. The plate is moving at a speed of just under 2 inches (5 centimeters) per year, and the underlying mantle is flowing at about 35 in (90 cm) per year. An average plate moves between 0.4 and 4 in (1 to 10 cm) per year.

"We expected it to flow faster, but the surprise was that it is flowing 20 to 30 times faster," Billen said.

The study is detailed in the May 20 edition of the journal Nature.