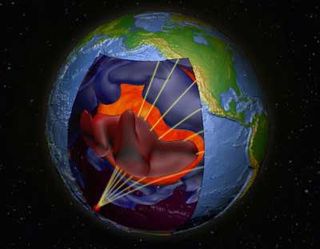 Red and blue regions depict zones where seismic waves propagate slower or faster than average, respectively. Distant earthquakes (e.g., the red star) send seismic energy throughout the planet, which traverses anomalous structure and brings information about Earth’s internal structure to the planet’s surface. The large red region beneath the Pacific Ocean sits atop the hot molten iron core (orange ball), is best explained as chemically distinct from the rest of the mantle.
(Image: © AAAS/Science)

Like the gooey center of a chocolate morsel harboring peanut butter and honey, inner Earth is far more nuanced than outward appearances would suggest. A new model is proposed in the May 2 issue of the journal Science.

Earth is made up of several layers, once thought to be pretty distinct.

The skin, or crust, goes down about 25 miles (40 km). Below that is the mantle area, which extends about halfway to the center of the planet. The mantle is a thick layer of silicate rock surrounding a dense, iron-nickel core, and it is subdivided into the upper and lower mantle, extending to a depth of about 1,800 miles (2,900 km). The outer core is beneath that and extends to 3,200 miles (5,150 km) and the inner core to about 4,000 miles (6,400 km).

New data reveal the mantle consists of more varying material than was thought. So convection — how heated material bubbles up — is now thought to work differently.

"Imagine a pot of water boiling," explains researcher Allen McNamara of Arizona State University. "That would be all one kind of composition. Now dump a jar of honey into that pot of water. The honey would be convecting on its own inside the water and that's a much more complicated system."

One clue to the new thinking is that seismic waves traveling through the planet have long been measured to travel at inexplicably different speeds. Sharp speed changes suggest differing materials. On each side of the planet there are two big, chemically distinct, dense piles or blobs of material that are hundreds of kilometers thick – one beneath the Pacific and the other below the Atlantic and Africa, the researchers say.

How stuff moves within the piles should help scientists better understand how surface plates move around, causing earthquakes and building mountains.

"The piles dictate how the convective cycles happen, how the currents circulate," McNamara said. "If you don't have piles then convection will be completely different."