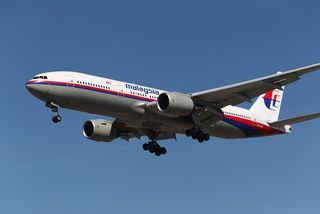 The search continues for the 239 passengers and crew of Malaysia Airlines Flight 370, which disappeared somewhere off the coast of Southeast Asia on Saturday (March 8).

Details about the Boeing 777-200ER's course and eventual disappearance are slowly developing, but authorities and military personnel from several countries have been joined by volunteers scanning satellite images in a quest to find the plane.

Assuming the plane crashed over the ocean, how long could survivors continue to live in the open seas? [5 Real Hazards of Air Travel]

The first concern of a crash over the open ocean is, of course, surviving the plane crash itself. And the odds of surviving are surprisingly good.

More than 95 percent of the airplane passengers involved in an airplane crash survive, according to the National Transportation Safety Board (NTSB).

Experts have noted that there are several things passengers can do to increase their odds of survival, such as wearing appropriate shoes and clothes.

Studies have revealed that people sitting behind the wing had a 40 percent greater chance of surviving than passengers in the front of the plane, and aisle seats near an exit row are among the safest. [Flight 370 Mystery: How Can a Jetliner Drop Off the Radar?]

The first 90 seconds after a crash are the most important — if you can stay calm and move out of the plane quickly, your odds of survival are much greater.

Some passengers are in such a state of panic that they can't unbuckle their seat belts: NTSB reports have found that many crash victims are found in their seats with their seat belts still buckled.

"That's why it is important to know what to do, even without the orders," Corbett told WebMD. "Some people sit and wait for orders, and if they don't hear any, then they sit right through the disaster."

Any plane crash over the ocean — generally referred to as "ditching" — presents special circumstances, of course, because any survivors would then be faced with staying alive at sea, either in a life raft or in open water.

A life raft would greatly increase a person's odds of survival, since they are less likely to become fatigued from treading water, less likely to be attacked by sharks, and rafts actually attract fish and birds (i.e., sources of food).

Additionally, life rafts are often equipped with first aid kits, fresh drinking water, flares and a canopy to protect passengers from the elements. But there's a catch: Not all airplanes carry life rafts.

In some cases, however, the FAA has waived the life raft requirement for certain planes, for example, if those planes have a life vest for every passenger and if they don't fly above 25,000 feet (7.6 km). It's not known at this point if Malaysian Airlines Flight 370 was carrying life rafts.

Even people lucky enough to be in a life raft face daunting challenges, particularly dehydration and starvation.

The human body needs water to survive, and few people have survived more than a week without it. Temperature, humidity and the size and health of the individual may lengthen or shorten their survival time without water.

In January, Jose Salvador Alvarenga washed ashore in the Marshall Islands after what he claimed was a 13-month, 5,000-mile (8,000 km)journey from Mexico. Alvarenga told officials that he survived by drinking turtle blood and rainwater, and eating fish and birds he captured with his bare hands.

"Offshore, most turtles, birds, and fish are safe to eat without cooking," Dr. Claude Piantadosi, a professor of medicine at Duke University Medical Center, told National Geographic. "Marine toxins in the flesh of fish, as a rule, are relatively uncommon."

Alvarenga also reported drinking his own urine when nothing else was available, but this might not have been a good idea. "Drinking your own urine is not recommended because you are re-ingesting the salt your kidneys are trying to eliminate," said Piantadosi, author of"The Biology of Human Survival: Life and Death in Extreme Environments" (Oxford University Press, 2003). [15 Weird Things Humans Do, and Why]

In the water, a person without a life preserver or some kind of flotation device would become fatigued within a matter of hours, especially in cold water. Sharks are also a threat, though a shark attack is not as common as many people think.

A more serious concern is hypothermia, a deadly condition that can occur in water as warm as 60 degrees Fahrenheit (16 degrees Celsius). Surface water temperatures in the Gulf of Thailand — the region where the Malaysian Airlines aircraft is likely to have crashed — are about 80 degrees F (27 C), which will increase the chances of survival for any people floating in it.

But it might take days to find the Malaysian Airlines airplane or any survivors. In 2009, after an Air France flight crashed into the Atlantic Ocean, it took five days to locate the wreckage of the plane, according to the Los Angeles Times, and two years to retrieve the black boxes. All 228 passengers and crew from that flight died.