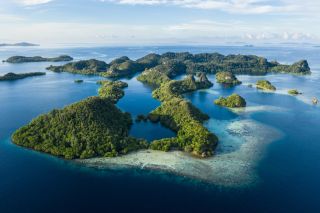 Remote islands of Indonesia are surrounded by coral reefs bursting with marine life. This area is part of a region called the Coral Triangle.
(Image: © Ethan Daniels/Shutterstock)

The Coral Triangle is a vast network of coral reefs that dot the waters surrounding the Philippines, Indonesia, Malaysia, Papua New Guinea, the Solomon Islands and Timor-Leste.

Also known as "the Amazon of the ocean," this expansive underwater ecosystem in Southeast Asia is a hotspot for marine biodiversity, hosting 30 percent of the world's coral reefs that span 2.3 million square miles (6 million square kilometers). From humpback whales to humphead wrasses, a wide variety of sea creatures survive and thrive along the reefs in the Coral Triangle.

"If you go to a place in the Coral Triangle — like the Verde Island Passage or Bali — there's so much microhabitat diversity," said Luiz Rocha, a coral reef scientist at the California Academy of Sciences. "You can go 100 yards [90 meters] from one reef to another, and the reef composition will be completely different."

The region is home to more than 500 species of reef-building corals, which have adapted to an array of habitats. Some corals, like those Rocha and other scientists at the California Academy of Sciences study, are adapted to live at greater depths and in cooler waters. Other corals in the region are adapted to muddy, sediment-rich waters, as opposed to the crystal-clear conditions most corals prefer, according the London Natural History Museum.

There are many theories as to why reefs in this part of the world are so successful. Here are a few that may explain the abundance of life in the Coral Triangle:

Unlike the Great Barrier Reef or the Caribbean Reef, which are more exposed and have changed significantly over time, the Coral Triangle is "a very stable region, even through geologic time," Rocha said. Research published in October 2018 in the journal Proceedings of the Royal Society B suggested that the persistence of these stable conditions over the last 30 million years may have given rise to the Coral Triangle's biodiversity.

Rocha is quick to note that "all of these hypotheses could have contributed to and influenced" the region's high biodiversity.

With roughly 264 million people strung along the island chain, Indonesia is the fourth most populous country in the world, according to the World Bank. In total, more than 360 million people live around the Coral Triangle, 100 million of which rely on the reefs for their livelihood, according to a 2014 report by the Coral Triangle Initiative. One-third of the population rely on seafood as their primary source of protein, fishing grouper, tuna and other predatory fish species, Barber said.

Healthy reefs also provide other benefits to the islands they encompass, acting as natural barriers that soften the blow from typhoons, storm-generated waves and even tsunamis. A June 2018 study in the journal Nature Communications revealed that damage to coastal communities in the Coral Triangle caused by flooding events would nearly double without the coral reefs. Additionally, without these reefs, countries like Malaysia, Indonesia and the Philippines would see the costs related to flooding events triple; if protected, the reefs that ring these countries could save, on average, more than $400 million each year.

Colorful reefs also draw tourists from around the world and provide an economic boost to exotic locales like Bali in Indonesia and Sipadan Island in Malaysia, which are known for their pristine scuba-diving conditions.

These prolific ecosystems are incredibly fragile. Habitat destruction, pollution and climate change are threatening coral reefs around the world, and the Coral Triangle is no exception.

Much of the damage to reefs in the Coral Triangle is caused by poor fishing practices, Rocha said. Often, locals will overfish, drag nets that damage fragile corals and leave fishing equipment to float around in the water.

Large predators, like sharks and groupers, are critical to the health of the reef, often keeping populations of coral-munching fish in check. When large, predatory fish are sustainably caught, the reef can rebound. Often, though, the Coral Triangle's largest predators are pulled from the reef in high numbers, shrinking their populations and allowing destructive fish populations to weaken the coral reef ecosystem.

Barber warned that the collapse of the fishing industry in the Coral Triangle due to overfishing would devastate the local countries and could eventually impact the entire world, as impoverished communities sought food elsewhere. If these regions are overfished, "it's not like they [communities] can just ramp up animal husbandry to replace that missing seafood," he said.

Yet another threat reefs face is plastic pollution. Small pieces of plastic are easily consumed by animals that live in the reef, but the presence of this litter acts as a threat multiplier. In some cases, plastics that pollute reefs in the Coral Triangle have acted as vectors for disease, spreading contagions like so-called white syndrome from sick to healthy corals, as reported in a 2018 study in the journal Science.

Because of climate change, reefs like the Coral Triangle will increasingly face bleaching events. As corals are exposed to rising water temperatures, they become stressed and expel the symbiotic algae that live inside them. This leaves the coral colorless, or bleached, and unable to feed themselves.

In the long term, ocean acidification will also cause problems for reefs. The ocean becomes more acidic as it absorbs carbon dioxide from the atmosphere. The calcium carbonate skeletons of most coral species aren't built to withstand that acidity, and so they slowly dissolve.