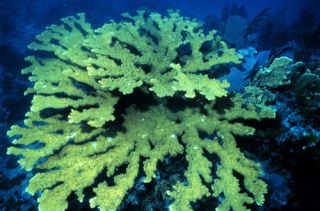 Coral reefs in the central and western Pacific are disappearing twice as fast as rainforests are on land—faster than was previously thought, a new study says.

The reefs in this region, called the Indo-Pacific, are disappearing at a rate of 1 percent per year—nearly 600 square miles of reef have disappeared per year since the late 1960s, researchers found.

"We have already lost half of the world's reef-building corals," said study team leader John Bruno of the University of North Carolina at Chapel Hill.

The Indo-Pacific contains 75 percent of the world's coral reefs, including Australia's Great Barrier Reef, the largest single structure built by living organisms (it can be seen from space), and has the highest coral diversity in the world.

Bruno and his colleagues compiled and analyzed a database of 6,000 quantitative surveys of reefs performed between 1968 and 2004 on more than 2,600 Indo-Pacific coral reefs.

The surveys tallied coral cover, which is a measure of the density of living corals in a specific part of the ocean floor. Bruno's study found that coral cover had decreased from 40 percent in the early 1980s to about 20 percent in 2003.

The pattern of loss across the entire study area indicates that coral loss is a global phenomenon, likely brought on by large-scale stressors such as climate change, coral disease, predators, nutrient pollution and overfishing.

While reefs cover less than 1 percent of the ocean globally, they are an integral part of coastal communities because of their high biodiversity and the economic benefits they provide in tourism and protection of coastal land from storms.

"Indo-Pacific reefs have played an important economic and cultural role in the region for hundreds of years and their continued decline could mean the loss of millions of dollars in fisheries and tourism," said co-author Elizabeth Selig, a UNC graduate student. "It's like when everything in the forest is gone except for little twigs, a few lone trees."

Surprisingly, coral cover was similar in highly protected reefs and unprotected reefs, which Bruno says has implications for coral conservation and the improvement of protection measures, which apparently are not working well enough.

"We can do a far better job of developing technologies and implementing smart policies that will offset climate change," Bruno said. "We can also work on mitigating the effects of other stressors to corals including nutrient pollution and destructive fishing practices."

The study is detailed in the Aug. 8 edition of the online journal PLoS One.