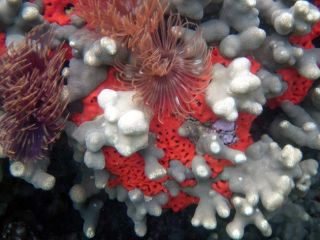 NEW YORK—Corals get cold sores too. Only, for corals, a herpes virus infection isn’t just annoying. It can be lethal, and it and other diseases are possibly a big factor in the deaths of coral reefs that humans are causing throughout the world’s oceans, new research shows.

Scientists have known for years that humans are killing corals indirectly and directly through global warming, overfishing and pollution. Many reefs off populous coasts have been decimated, while those near uninhabited areas are often thriving.

“For some reason, when you put people next to reefs, they die,” said microbiologist Forest Rohwer of San Diego State University at a recent symposium at the American Museum of Natural History here.

A 2004 study found that 70 percent of the world’s reefs had been destroyed or were threatened by global warming and other human activities.

But just how these problems translate into a death sentence for corals has been difficult to work out.

Corals reefs are some of the most stunningly diverse habitats on the planet. They are home to thousands of species at all levels of the food chain: invertebrates such as sponges and starfish, small fish such as angelfish and clown fish, big fish such as parrot fish, barracuda, groupers and snappers,and even sharks.

“These are basically the most beautiful thing on the planet,” Rohwer said.

But the most amazing variety, he said, is actually found in the realm we can’t see: “We know [from DNA sequencing] that the most diverse things on a coral reef are actually the microbial community.”

There are about 10 million bacteria and 1 billion archaea on every square centimeter of coral, and two neighboring corals can have completely different microbes living on their surfaces.

The reefs are also constantly interacting with the water surrounding them—in only a milliliter of ocean water (about one-fifth of a teaspoon) there are about one million bacteria and 10 million viruses.

“This allows the coral to actually control their microbial community by providing the food source to them through their mucous,” Rohwer explained.

Normally, corals use their cilia (tiny finger-like structures) to pass the bacteria along and push them off in balls of mucous that come off the corals and burst, Rohwer said.

But when humans come into the picture, microbes get the upper hand.

When humans overfish a reef, there’s nothing left to eat the food produced by the algae, so all that carbon builds up in the water column and feeds the microbes, sort of like "MicrobeGro" fertilizer, building up their numbers and overwhelming the coral.

“The coral is actually losing control of its microbial community,” Rohwer said.

Even though these microbes normally live in a harmonious balance with the coral, they are still potential pathogens.

Rohwer and his colleagues tested their idea by putting pieces of Panamanian corals in cups with seawater, and adding different “treatments” to each cup, and essentially “just look[ing] for the coral to die,” Rohwer said.

Rebecca Thurber, one of Rohwer’s postdoctoral researchers, also took pieces of coral and changed conditions such as nutrients, temperature and water pH, then cut up the coral and sequenced the DNA of the microbes that grew on their surface.

And what was the number one disease affecting the corals? Herpes viruses.

“They dominate almost all the viruses that are present,” Thurber told LiveScience.

Herpes viruses are naturally found in many different animals (95 percent of humans carry some kind of herpes virus).

“Everybody in this room has at least a couple herpes viruses running around,” Rohwer said at the symposium, causing some in the audience to chuckle. “And when you get stressed, or immuno-compromised, they’re going to start hopping out and giving you little cold sores or other wounds that we won’t talk about.”

“That seems to be what’s going on in the corals too,” he added.

Rohwer and Therber’s findings suggest that these disease outbreaks are just one of the many ways human activity is killing off corals.

“They’re screwed no matter what we do to them,” Rohwer said.