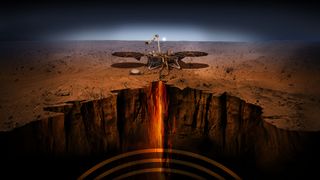 Artist's illustration of NASA's InSight lander on the surface of Mars. InSight touched down on Nov. 26, 2018, to study Mars' internal structure and composition.
(Image: © NASA/JPL-Caltech)

WASHINGTON — To find life on Mars, scientists may need to give up surface exploration and "go deep."

Typically, Mars missions searching for signs of life target the planet's surface, at sites where there are signs of ancient water (a reliable indicator of where life is found on Earth). But while no life has turned up yet on Mars' surface, there may be an abundance of microbial Martians congregating underground, according to research presented Dec. 11 here at the annual meeting of the American Geophysical Union (AGU).

In recent decades, explorations underground on Earth have revealed the so-called deep biosphere — a subsurface environment teeming with microorganisms. And scientists suspect that a similarly biologically-rich zone may be thriving under Mars' surface, too. [Mars-like Places on Earth]

In fact, perhaps there was never an evolutionary push to inhabit the surface of Mars at all, Joseph Michalski, an associate professor with the Department of Earth Sciences at the University of Hong Kong, said at the presentation. The expectation that life evolved on the Martian surface may reflect a bias established by what we know about life on our home planet, Michalski said.

Billions of years ago, when the planets in our solar system were young, the surface of Mars was likely quite similar to that of Earth, its rocky neighbor. That changed when Mars lost its magnetic field, which exposed it to bombardment from intense radiation that would have made survival aboveground extremely challenging, Michalski told Live Science.

However, it's possible that life was already "cooking" on Mars before that happened. Scientists think life first appeared on Earth about 3.8 billion to 3.9 billion years ago, when conditions in some spots likely resembled today’s hydrothermal environments — much like Mars at the time. Perhaps, life arose on Mars at the same time that it was taking shape on Earth, but adapted exclusively to life underground, Michalski said.

"Life could have emerged in those hydrothermal settings and survived in the subsurface for quite a long time," he said.

And if Earth's deep biosphere is any indication, the underground Martian microbial communities could be exceptionally rich and diverse. Earth's deep biosphere was first discovered only about 30 years ago, and estimates since then have suggested that those deep-dwelling microorganisms make up nearly half of all life on the planet, Michalski told Live Science.

Microbes in Earth's deep biosphere play a role in burying carbon that could otherwise become a greenhouse gas, are linked to deep energy resources "and are important for understanding the origins and evolution of life," Michalski said.

"We're at a point now where it's truly a frontier of understanding what 'deep biosphere' truly means on Earth, and how that relates to exoplanets and other planets in our solar system," he said. "It's a window into our own origins."

Mars' subsurface is an especially promising place to start looking for extraterrestrial microbes because it's "even more habitable" for microorganisms than Earth's deep biosphere. Subsurface rock on Mars is more porous than on Earth — creating pockets for nutrients and gas exchange — and Mars' cooler core (though still molten) provides a more hospitable temperature for microbes living in deep rock, Michalski added.

"We could have single-celled organisms that could be dormant for a long time, but could survive through metabolizing hydrogen, methane, potentially sulfur," Michalski told Live Science. "Without being too specific, we think there are a lot of possibilities."