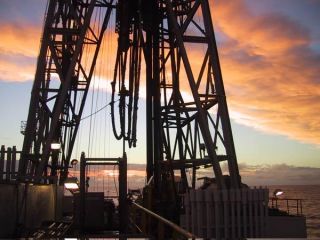 Monster machine: the massive drill looms above the deck of the Integrated Ocean Drilling Program ship used for the research. Scientists spent weeks in the middle of the Atlantic Ocean, boring deep into a subsea mountain to reach the remote crust where the tiny life forms were found.
(Image: © Amber Harris.)

Microbes have been discovered living in the deepest layer of the ocean's crust, in a neighborhood so remote it's almost never been sampled.

And although the microbe community uncovered was more like Wyoming than New York City the bacteria were few and far between the research revealed life goes on more than three-quarters of a mile (1,391 meters) below the seafloor.

The bacteria were found in a region known as the gabbroic layer (gah-BROH-ick layer) the deepest layer of the Earth's crust , which rests directly on the planet's ever-shifting hot mantle.

Even though the dense, greenish rock constitutes the greatest volume of the ocean's crust, it has rarely been studied, and, although researchers have delved deeper into the Earth's crust on land, the recent research was the first investigation into life in the gabbroic layer beneath the sea.

Scientists were able to reach the gabbroic layer thanks to subsea geological upheavals in the distant past, which thrust a giant undersea mountain , known as the Atlantis Massif, up from the seafloor, bringing the gabbroic layer within reach of research vessels equipped with massive drills.

Mason, who headed up the recent research, expected to find life there, based on her previous study of microbes in basalt, the layer of the Earth's crust just upstairs from the gabbroic layer.

The shock came when she realized the microbes in the gabbroic layer were totally different from those that lived in basalt.

"We did not see any overlay in the microbial community at all, so that was a surprise," Mason told OurAmazingPlanet.

More surprises were in store.

Stephen Giovannoni, a professor and microbiologist at Oregon State University, said that of the bacteria Mason discovered, almost all seem to live on hydrocarbons (organic chemicals that are made up mostly of hydrogen and carbon), in particular, methane.

Giovannoni compared the newfound microbes to the oil-digesting organisms that seemingly consumed much of the oil also a hydrocarbon that gushed into the Gulf of Mexico during the BP oil spill earlier this year.

Adding intrigue to the story, it appears the hydrocarbons these deep-dwelling microbes eat may be produced inside the Earth itself, in a mysterious process entirely independent of the power of the sun, the energy source for almost all life on our planet.

Giovannoni said the finding has interesting implications for life in a place even more remote than the ocean's crust Mars.

Scientists have discovered methane on Mars, and now there is the tantalizing possibility that there could be something up there that's eating it.