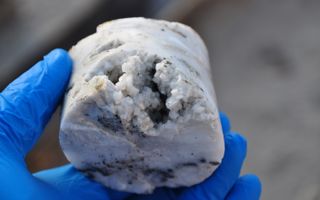 Thousands of feet below Earth's surface and far beyond the reach of sunlight, scientists recently discovered an unexpected form of life: microbes that typically produce their energy through photosynthesis.

Known as cyanobacteria, these hardy microorganisms have been around for billions of years, and though they're tiny, their photosynthesis prowess — in which they use the sun's energy to turn carbon dioxide into food for growth — played a big part in the planet's history. This activity helped shape a young Earth's oxygen-rich atmosphere, laying the groundwork for the emergence of all forms of life.

Today, cyanobacteria occupy a diverse range of environments, from baking deserts to oceans. But everywhere these organisms live, they typically get at least some exposure to sunlight. So, finding these creatures deep underground in total darkness was a big surprise, the researchers said. [Extreme Life on Earth: 8 Bizarre Creatures]

In a prior expedition, the scientists had detected a rich subsurface ecosystem in the Iberian Pyrite Belt, an area along the Iberian Peninsula in southwestern Spain with enormous reservoirs of sulfide deposits. The researchers performed their second investigation deeper underground, in a previously untouched location at the same site. There, they targeted rocks that they anticipated would contain microbes closely resembling surface bacteria. They did not, however, expect to find cyanobacteria at a depth of 2,011 feet (613 meters). In fact, cyanobacteria were the most abundant organisms in the researchers' samples, the team reported in a new study.

Scientists sometimes refer to environments where light is scarce — or even nonexistent — but where life persists nonetheless as the "dark biosphere," the study said. Inhabitants of some of these gloomy habitats include strange creatures, such as a fanged crustacean, a blind cavefish and the aptly named Hades centipede.

And now, scientists can add cyanobacteria to the list.

By lighting up the rock samples with fluorescent microscopy, the researchers learned that the subterranean microbes were not that different biologically from their light-loving cousins, but these bacteria lacked certain structures for performing photosynthesis.

Instead, the underground microbes used a different process to generate energy. Large numbers of the cyanobacteria were found clustered near concentrations of hydrogen. This suggested that the microbes stay alive by absorbing hydrogen gas, chemically combining it with oxygen and then releasing hydrogen electrons in measured doses, the scientists wrote in the study.

While cyanobacteria have been found in underground rocks before, there was always the lingering possibility that the microbes found their way into the samples through surface contamination, the study authors reported. The new findings present the first evidence that cyanobacteria can live and thrive in a world without light and that these hardy microbes — which are even more adaptable than once thought — play an important role in subsurface ecosystems.

The findings were published online Oct. 1 in the journal Proceedings of the National Academy of Sciences.