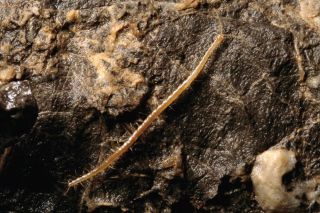 Deep beneath the surface of the Earth, in a dank and dismal cave, lives Hades, the invertebrate king of hell.

Named for the mythological god of the underworld, Geophilus hadesi is a newly discovered species of centipede that inhabits the deep caves of the Velebit Mountains in Croatia. Unlike most centipedes of the order Geophilomorpha, which only occasionally seek shelter in caves, G. hadesi spends all its life in this dark, underground environment. Today (June 30), the team of scientists who discovered the remarkable critter published the first-ever description of the animal in the journal ZooKeys.

G. hadesi is one of only two known species of centipedes that never leave their cavernous homes. The other underground dweller, Geophilus persephones (named for the queen of the underworld, Persephone), was first discovered in a cave in France in the 1990s. G. hadesi was named with this mythical queen in mind, according to Pavel Stoev, an associate professor of zoology at the National Museum of Natural History in Sofia, Bulgaria, and lead author of the paper detailing the new centipede species. [Creepy Crawlies & Flying Wonders: Incredible Cave Creatures]

Though its home, located nearly two-thirds of a mile (1 kilometer) below the Earth's surface, is a bit dark and gloomy, G. hadesi survives just fine, Stoev told Live Science. It has "exceptionally elongated" antennae and furlike body hair, or setae, covering its appendages, and these two features let the animal detect prey in total darkness, Stoev told Live Science.

Like most centipedes, G. hadesi feeds on living animals — most likely larvae, springtails (tiny, insectlike hexapods), worms, woodlice, spiders and other small prey. Though the centipede's bite is venomous, this "hellish" creature is likely completely harmless to humans, Stoev said. Not that G. hadesi spends much time with people. While scientists from the Croatian Biospeleogical Society have explored the Velebit Mountains where the Hades centipede lives, some of the crevices it inhabits are unreachable. One specimen was collected from a depth of 3,609 feet (1,100 meters), the deepest known habitat for any centipede.

G. hadesi has a long, flattened body that makes crawling around such rocky crevices easy. And its 33 pairs of legs end in thin claws that are "unusually long," according to the researchers. Like other creatures with pointy claws, such as the yeti crabs that inhabit the waters off Antarctica, the Hades centipede may have developed this feature in order to cling more securely to rocks.

"The change of a species' appearance is usually a result of a long evolution that is likely to have happened [over] the course of millions of years," said Stoev, who noted that the Hades centipede has also adapted to the deep caves' cold temperatures, which can drop as low as 37 degrees Fahrenheit (3 degrees Celsius).

Scientists aren't exactly sure why the Hades centipede started living underground in the first place (though it likely had nothing to do with losing a bet to Zeus and Poseidon).

"It could be a dramatic change in the outside temperatures and overall conditions that forced less-adaptive organisms to seek shelter underground where the conditions are more stable and less dependent on the outside fluctuations," Stoev said.

The Hades centipede isn't the only critter that inhabits the caves of Velebit mountain range, which spans 90 miles (145 km) of northwest Croatia. Scientists have already discovered a whole host of pale, cave-dwelling creatures there. And many more creatures likely remain to be discovered, Poev said.