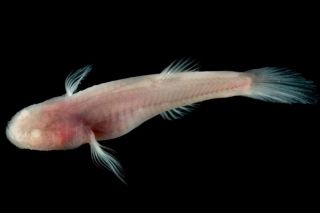 The cavefish Typhlichthys subterraneus is both blind and hard of hearing.
(Image: © Daphne Soares)

After generations of living underground and in perpetual darkness, species typically lose their eyesight. Scientists have observed this phenomenon in a range of creatures, including moles, shrimp, flatworms and fish. But new research shows that compared with their surface-dwelling relatives, at least two species of amblyopsid cavefish are partially deaf, in addition to being blind.

"The first hypothesis we had was that these fish that lost their sight should have an increase in hearing capabilities," said lead researcher Daphne Soares, a sensory neuroscientist at the University of Maryland. "It was a big surprise when we found they were a little deaf, and it took a while to come up with an understanding of what was happening."

In humans, the loss of sight is sometimes accompanied by better hearing, at least in people who became blind early in life. But until now, research looking at blind fish species hasn't shown the same phenomenon. For example, the cave and surface forms of the Mexican tetra (Astyanax mexicanus) hear equally well; same thing goes for the molly Poecilia mexicana.

For their study, Soares and her colleagues decided to look at Amblyopsidae, a small, mostly subterranean family of freshwater fish located in the Eastern and Central regions of the United States. Cave amblyopsids are some of the most comprehensively studied cavefish in the world, because of the range of adaptations they have for living in the dark, such as sensory organs that detect water flow. [Photos: The Extraordinary Evolution of Blind Cavefish]

The team compared the hearing capabilities of two amblyopsid cave species, Typhlichthys subterraneus and Amblyopsis spelaea, with their closest amblyopsid surface relative, Forbesichthys agassizii. They tested how the brains of fish responded to sounds of varying frequencies and loudness, resulting in hearing profiles for each species. The researchers found that the three species could hear equally well at lower frequencies; however, only the surface species could hear frequencies higher than 800 Hz, and up to 2 kHz. Moreover, the researchers discovered that the cave amblyopsids had lower densities of hair cells — auditory receptors in the ear that are essential for hearing — than the surface amblyopsids.

But these findings left the question: Why did the blind fish evolve to have poorer hearing than their sighted relatives? The team figured it must be something in the environment, so they measured the ambient noise in the aquatic cave and surface habitats. They found the noise in the underground streams peaked near 1 kHz, which lines up with the frequencies the cavefish are deaf to. The cavefish's hearing threshold stops around where the noise in their habitat picks up.

"The caves are very loud with the sound bouncing off the walls and stuff," Soares said. "It would not be very adaptive for the fish to hear at a frequency where the environment is so loud."

With their blindness and difficulty hearing, the two cavefish species likely navigate their surroundings — and find food and mates — using their hypersensitivity to water vibrations, Soares said. The team is now interested in seeing if the cavefish found in other parts of the world have undergone similar changes. "We are trying to really understand how animals adapt to the world's diversity of extreme environments," she said.

The research was detailed March 26 in the journal Biology Letters.