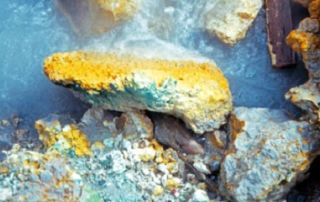 This is a rock in an Icelandic hot spring near Reykjavik with sulfur and Galdieria sulphuraria.
(Image: © Christine Oesterhelt)

The red alga Galdieria sulphuraria has a penchant for extremes. The single-celled organism can be found in hot sulfur springs in Iceland or Yellowstone National Park, cooking up food through photosynthesis. But it can just as well thrive in the caustic drainage of a dark old mine shaft among toxic metals like arsenic and mercury, feeding on bacteria.

Scientists have discovered how Galdieria came to be so versatile: It pilfered the genes it needs to survive in such hostile places from simpler organisms, like bacteria and archaea, that were already adapted to extremes.

"Why reinvent the wheel if you can copy it from your neighbor?" asked study researcher Martin Lercher, of Heinrich-Heine University in Dusseldorf, Germany. Lercher and colleagues sequenced the genome of Galdieria and found that at least 5 percent of its protein-coding genes look like they were taken from less complex species.

For example, Galdieria seems to derive its tolerance for high temperatures from a single gene that it stole from heat-loving archaea and then copied hundreds of times, the researchers say. (Archaea that thrive in the hottest places tend to have the most copies of this gene.) Galdieria also can endure high salt concentrations and make use of a wide variety of food sources likely because it robbed other genes from extremophile bacteria, the study shows.

The researchers say Galdieria is the first known eukaryote (organism with a nucleus) that has adapted to its extreme lifestyle through a process known as horizontal gene transfer, in which genes are exchanged without sex between organisms that aren't related to each other.

"It's usually assumed that organisms with a nucleus cannot copy genes from different species — that's why eukaryotes depend on sex to recombine their genomes. How has Galdieria managed to overcome this limitation? It's an exciting question," Lercher said in a statement.

Another Heinrich-Heine University researcher, Andreas Weber, said in a statement that Galdieria's feat is "a dream come true for biotechnology."

"Galdieria has acquired genes with interesting properties from different organisms, integrated them into a functional network and developed unique properties and adaptations," Weber added. Advances in genetic engineering might make it possible to endow other algae with proteins similar to the ones that give Galdieria its high stress tolerance — an alluring prospect for oil-producing algae that could be exploited for biofuels, the researchers say.

The study, which was funded by the National Science Foundation, was detailed this week in the journal Science.