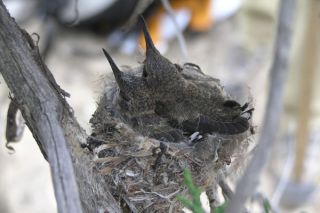 Mounting evidence shows that noise from traffic, oil drilling, Navy sonar and other technology can make nearby animals scatter or change their behavior it.

New research takes a broader perspective and asks: How does noise affect natural communities? The results indicate that noise has the potential to trigger cascading effects that could alter the structure of these communities, known as ecosystems.

In nature, it's unusual for one factor to change in isolation; a change in one animal's behavior, for example, will likely have ripple effects on whatever it eats and whatever eats it.

To see what was happening further down the line, researchers looked at pollination and seedling establishment of plants growing near natural gas wells in Rattlesnake Canyon Habitat Management Area in northwestern New Mexico.

Compressors running nonstop at the wells generate a droning roar, which at the study sites could be compared with the sound of a lower-pitched vacuum cleaner several feet away, said lead researcher Clinton Francis, postdoctoral fellow at the National Evolutionary Synthesis Center in North Carolina.

The researchers compared these sites to others located farther away, where noise consisted of an occasional bird call or, more rarely, a distant plane or car, Francis told LiveScience in an email. [Shhh! 10 Ways to Quiet National Parks]

Not all species lose out because of human noise — some can benefit — but if any play important ecosystem roles, such as pollinating plants, dispersing seeds or preying on other species, the effects of noise could trickle down to other members of the community, according to Francis.

To see how noise at the New Mexico wells affected pollination, the researchers put out artificial flowers resembling a common flower, the scarlet gilia, pollinated by black-chinned hummingbirds in both types of sites. They found that the hummingbird visits were five times more common at the noisy sites, and more pollen was also transferred among fake flowers at the noisy sites — good news for flowers at noisy sites.

This wasn't a surprise, as previous research has shown that the hummingbirds actually prefer noisy sites; this may be because their predators, western scrub jays that eat the hummingbirds' nestlings, flee human noise, Francis and colleagues suggest.

When looking at how noise changed the fate of seeds from one of the dominant trees in the ecosystem, piñon pines, the researchers found evidence of the opposite effect. Seedlings at quiet sites were four times more abundant than at noisy ones. The team attributes this to differences in the animals picking up the seeds.

Western scrub jays store the seeds they find for later meals, but many of these seeds go unrecovered and germinate, giving the plants an opportunity to spread. The noise-sensitive scrub jays only showed up at the quiet sites. Meanwhile, mice, which are more inclined to eat the seeds, showed up more frequently at the noisy sites — bad news for piñon pines at noisy sites.

Over the long term, this dynamic could mean fewer piñon pines in noisy areas. This change, too, would ripple out, since hundreds of species — fungi, insects, plants, mammals and birds — are closely associated with the pines, Francis said.

"The problem is that the full effects of noise exposure may not be felt by the ecosystem for many decades, perhaps even long after gas wells are gone," Francis told LiveScience in an email, explaining that the pines and the other dominant tree, the Utah juniper, grow slowly and live long lives.

The research appears in the March 21 issue of the journal Proceedings of the Royal Society B.