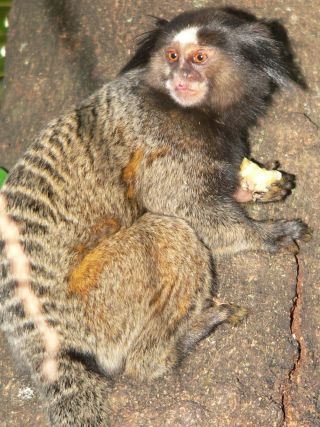 Unlike us, monkeys don't have earplugs for tuning out the din of city life, so instead they relocate to the quietest parts of their habitat — often at the expense of a full belly, a new study finds.

The study showed that marmoset monkeys living in a park in the Brazilian city of Belo Horizonte avoided the noisiest areas of the park, including places that had the most food.

"Brazil is an extremely noisy country," study researcher Robert Young, of Pontifícia Universidade Católica de Minas Gerais. "Like a human, they [the monkeys] can move homes; they've chosen to move to a quiet part of the neighborhood because the noise bothers them."

Noise pollution also affects ocean life, including whales and squid, and other animals, such as birds.

The researchers studied a group of marmosets living in the 45-acre (18-hectare) park in Belo Horizone, which is about 200 miles (320 kilometers) north of Rio de Janeiro. Over the course of a year, the researchers measured the noise in the park at different times of the day. The noise levels varied between 50 decibels, or about the noise level of an office, and about 90 decibels, depending on the location, time and day. (Sundays traditionally have less noise from road traffic and more from pedestrians visiting the park.) By comparison, the noise levels in the wild usually hover around a much quieter 30 decibels. [Shhh! 10 Ways to Quiet Noisy National Parks]

During the week, the edges of the park can be as loud as a dance club, Young said, and on Sundays a recurring street fair and visitors will drive up the noise level in the interior of the park to 74 decibels.

The monkeys inhabited the quietest areas of the park, moving as the noise levels changed. These quiet areas happen to contain fewer of the park's fruiting trees, the monkeys' favorite food source.

There are two possible reasons the monkeys avoid the noise, Young said. The noise could stress out them out. Noise pollution has similar effects on humans; people living in areas of high road traffic noise seem to suffer more heart attacks.

"The other possible reason is that the noise interferes with their ability to communicate," Young said.

Some of Young's unpublished work suggests the latter, showing that the animals in these city parks use calls of different frequencies to communicate with each other, and use these calls about 10 times less than their wild counterparts. That research has yet to be peer-reviewed.

Young's research group is continuing to study the effects of noise pollution on wild animals, including the noise caused by mining operations in the forests of Brazil.

The study was published today (June 28) in the Journal of the Royal Society Biology Letters.