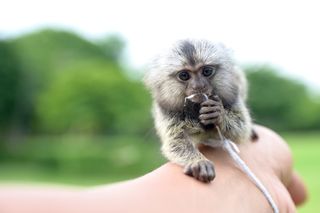 Marmosets are small monkeys that live high up in the canopies of South American rainforests. There are more than 20 species, and most could fit comfortably in an adult human's hand.

Marmosets have soft and silky hair, and many have tufts of hair or manes on either side of their faces, which are sparsely furred or naked, according to the Animal Diversity Web (ADW). There is a wide variety of colors among marmosets, from black to brown to silver to bright orange.

Marmosets tend to stay in the treetops and behave a lot like squirrels. They have long tails — longer than their bodies, usually — but unlike other New World monkeys (capuchins and squirrel monkeys, for example), their tails are not prehensile; that is, marmosets can't use their tails to grasp things. However, their tails do help them keep their balance as they scamper among the branches, according to the San Diego Zoo.

Their hands and feet resemble those of squirrels, according to the ADW. Except for the big toe, which have nails, their digits have sharp claws. Also, the big toe and the thumb are not opposable. Marmosets, as well as their close cousins, tamarins, are considered to be the most primitive monkeys because of these anatomical characteristics, according to Dennis O'Neil, a professor of behavioral science at Palomar College in San Marcos, California.

These small monkeys spend their time in the trees of South America. Many species live in the rainforest surrounding the Amazon River, or in the tropical forests along the Atlantic coastline.

Marmosets are active during the day and spend their time foraging. They are social animals that live in small groups, called troops, made up of four to 15 relatives and are often territorial. A territory for a common marmoset troop, for example, can range from 5,000 to 65,000 square meters (1.2-16 acres), according to the National Primate Research Center at the University of Wisconsin.

Marmosets are omnivores, which means they eat a variety of foods. Their diet includes insects, fruit, tree sap and other small animals.

Pygmy marmosets love the sap of trees. They saw holes into the bark to get at the sap with their teeth and can make thousands of holes in a small selection of trees.

Marmosets commonly give birth to twins. This is a rarity; all other primate species usually give birth to only one infant at a time, according to O'Neil. Sometimes they have single births or triplets, but these are less common. The exception is the Goeldi's monkey. It does not have twins.

The gestation period is four to six months. Male marmosets are often the main caregivers of the offspring and stay loyal to their family. They won't leave, even when tempted by a sexually mature female.

Marmosets are monogamous. The youngsters in the troop help the male with the care of the babies. Just being around a monogamous pair of marmosets will prevent younger ones from sexually maturing. So, they must leave their group to mate, but typically, just the monogamous female in the troop will conceive in a year.

Marmosets live around five to 16 years in the wild.

Here is the taxonomic information for marmosets, according to the Integrated Taxonomic Information System (ITIS) and the Animal Diversity Web (ADW):

The buffy-headed marmoset is the only marmoset listed as endangered, according to the International Union for Conservation of Nature's Red List of Threatened Species. It is estimated that there are only around 2,500 mature individuals left.

Wied's marmoset is listed as near threatened. It is thought that the species has lost 20 to 25 percent of its population over the past 18 years. The decline is mostly due to habitat loss.

Common marmosets can give birth to non-identical twins, which is unusual trait for primates.

Marmosets are often used for research on human aging and disease because their bodies are very close to those of humans.

Marmosets are sometimes kept as pets, but they are very difficult to care for. For example, they require a very specific diet and access to UV light to stay healthy.