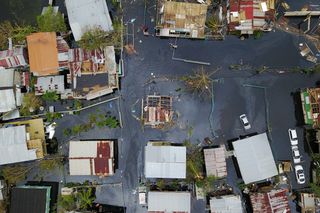 An aerial view of the flooded neighborhood of Juana Matos in Puerto Rico, on Sept. 22, 2017, in the aftermath of Hurricane Maria.
(Image: © Ricardo Arduengo/AFP/Getty)

Puerto Rico is just beginning what is expected to be a long recovery after Category 4 Hurricane Maria slammed into the U.S. territory last week. But it wasn't just the winds of up to 155 mph (250 km/h) that pummeled the islands. Maria also lashed Puerto Rico with rains that have totaled close to 3 feet (1 meter) in some places.

Those torrential rains, which were still falling as of Friday (Sept. 22), are the product of the abundant moisture inherent to tropical storm systems and an extra push provided by Puerto Rico’s mountainous terrain that helps to wring out extra rain. All that rain falling so quickly caused intense flash floods that turned streets into rushing rivers.

Tropical systems are moisture monsters, deriving their energy from the evaporation of warm ocean water. Because of that overabundance of moisture, these systems are some of the biggest rain producers around, previous research has found. [Hurricane Maria's Aftermath: Photos Reveal Devastation on Caribbean Islands]

Hurricane Harvey, like no other storm, demonstrated that potential when it continuously dumped rains on the Houston area late last month. The highest total from that storm was the nearly 65 inches (1.7 m) of rain that fell in Nederland, Texas, the National Oceanic and Atmospheric Administration (NOAA) announced last week.

But Harvey's extreme rains occurred because the storm got stuck over the same area for several days. While Maria moved slower than the average storm, which also allowed it to dump copious amounts of rain, said David Roth, a meteorologist with NOAA's Weather Prediction Center, it did move continuously. It also got an assist from Puerto Rico's terrain.

When a storm like Maria hits Puerto Rico, "the air is being forced by very strong winds up very steep mountain slopes," which causes the air to cool, Matthew Kelsch, a hydrometeorologist with the University Center for Atmospheric Research in Boulder, Colorado, told Live Science. "Cool air can't hold as much moisture, so it drops the moisture out."

That's when you get rains falling at rates of several inches per hour, Kelsch said. Most of the central and eastern portions of the main island saw 15 or more inches (38 cm) of rain in just a couple of days.

When that much rain fell that fast on steep terrain, "there was no place for that water to go but down," so "it looks for any conduit that it can get to" to flow downward, said Richard Kane, associate director of the U.S. Geological Survey's (USGS) Florida Water Science Center.

Puerto Rico isn't a stranger to heavy rains, and many tropical systems can dump between 10 and 15 inches (25 to 38 cm) of rain on the territory, said Roth said. The record rainfall from a tropical event in Puerto Rico came from a 1970 tropical depression, which dropped more than 40 inches (more than 1 m) of rain on parts of the territory.

"The intensity doesn't matter when it comes to heavy rainfall," Roth said. What mattered in this case was that Maria was a large storm that blanketed Puerto Rico; that the storm's core, where the heaviest rains are, came ashore; and that it moved slowly enough that it kept rain falling for hours on end.

Because Puerto Rico sees heavy rains more regularly, its streams and rivers are more adapted to such precipitation, but Maria's rains were too much even for those waterways, said Anne Jefferson, a hydrologist at Kent State University in Ohio. Typically, stream channels are adapted to rains that might recur every one or two years, she said, far less than what Maria dropped, so streams easily overflowed their banks in response to the storm.

The rocky nature of the terrain also enhances flooding, because such surfaces can't absorb the rains. Kane said. What soil there is can also quickly become too waterlogged and heavy to support itself on steep slopes, causing it to fail and create mudslides, Jefferson said.

Twelve of the slightly more than 100 stream-flow gauges maintained by the USGS registered record flood levels in Puerto Rico, Kane said, though those records all have to be double-checked. Several gauges were showing spurious data, though, likely because debris carried by floodwaters had damaged the instruments or pulled them loose, he said.

Puerto Rico's steep terrain also made floodwaters move much faster than those in Houston, Jefferson said. This means the waters could carry much bigger chunks of debris, from tree limbs to boulders, which can cause more damage, she said.

The specter of climate change also looms over both Maria and Harvey, because the Earth's atmosphere is warming and so can hold more moisture, providing even more of a boost to rainfall, Jefferson said. Determining the degree to which warming enhanced either event would take a dedicated study, though.

Puerto Rico's higher terrain does confer it one advantage, however. "The flooding will be over faster in Puerto Rico," Jefferson said, as the floodwaters flow out to sea and leave residents to try to pick up the pieces of the territory and put them back together.